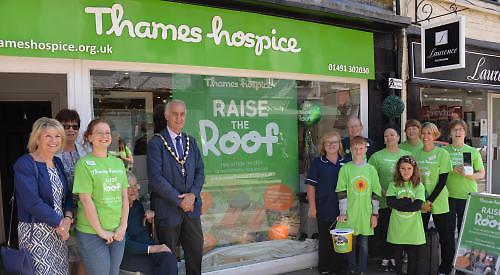 AN appeal to raise the final £3 million for a new hospice was launched in Henley on Sunday.

Thames Hospice launched its Raise the Roof appeal at its shop in Duke Street. The charity is building a
£22 million hospice at Bray Lake but needs to raise the remaining funds.

Jonathan Jones, chairman of trustees, and Henley Mayor Ken Arlett unveiled a poster in the window of the shop encouraging people to donate.

Mr Jones said: “We provide care to individuals, their families and carers at really the most challenging times in their lives as they are threatened with life-limiting illnesses.

“We need to complete the new hospice and there’s no better place to launch this campaign than here at one of our great shops and with our staff who are the face of our charity.”

The current hospice in Windsor has been altered and extended over the years and cannot be adapted any more. Construction work on the new hospice started earlier this year.

To support the appeal, visit www.raisetheroof2020.org.uk