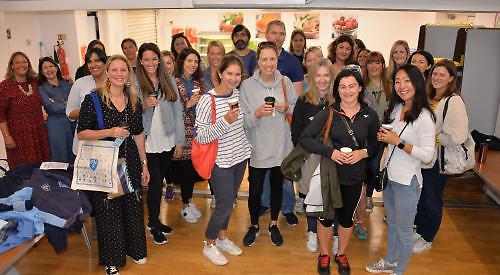 A COFFEE morning at St Mary’s School in Henley was held in memory of former parent Emily Burkitt.

She lost her fight against breast cancer in July only weeks after raising more than £40,000 for charity.

Mrs Burkitt, 37, lived in Greys Road with her husband James and their children Poppy, six, and Charlie, five, who both attend the independent school in St Andrew’s Road.

Mrs Burkitt used to lead the Friends of St Mary’s School, which organises the annual Macmillan coffee morning. Her husband attended this year’s event, where visitors made a donation in return for coffee and cake before he drew the raffle.

Mr Burkitt said: “There can’t be anything closer to home for me than supporting a cancer charity.

“I want to be able to do something to support the people that are about to go through what I went through and probably what I’m still going through.

“Those unlucky people who have cancer in their families are really in the trenches and a charity like Macmillan helps them.”

Mr Burkitt said he had received “incredible” support from friends, family and the school community.

He said: “Coming back to school has been a real shock to the system. Getting uniforms and PE kit ready, getting the kids somewhere at the right time, and still people have been so kind and supportive.

“The people of this school community are really good, kind people.

“Every so often I’ll be clearing out a cupboard and there’ll be a letter from 10 or 15 years ago or a photograph and that’s the hard part and completely stops me in my tracks.”

Hannah Créau, a member of the friends group, said: “Emily was a really good friend of mine and I really wanted to work on the Macmillan event this year.

“Of course this year is very personal because it was such a shock to lose Emily. She led the Friends of St Mary’s School last year and put so much energy into raising money for the school and for our charities.”

The event raised just over £400, which will be added to the rest of the money the school raises during the year for charity and donated to Sue Ryder, which cared for Mrs Burkitt at its Nettlebed hospice in the final days of her life.

Mrs Burkitt was diagnosed in 2015 and underwent chemotherapy, radiotherapy and hormone treatment as well as having a mastectomy.

In August last year she felt a lump on her collar bone and discovered she had stage four triple negative breast cancer.

She organised a black and white themed dinner at Phyllis Court Club in Henley in June to raise money for Breast Cancer Now and CoppaFeel!, a charity which raises awareness.

She lost her battle against the disease less than four weeks later.