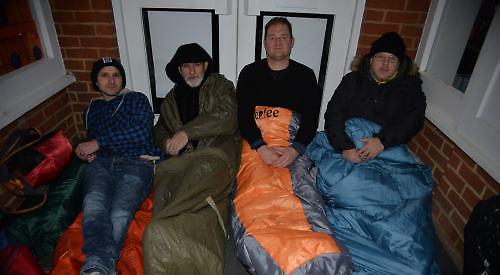 FOUR people slept outdoors in Henley during Saturday night as part of the World’s Big Sleep Out.

Businessman Carl Williams, 52, who organised the event in Market Place to raise money for homelessness charities, was among the quartet.

He had expected about 20 people to join him, including town councillors Sarah Miller and Kellie Hinton but they both pulled out.

Instead only Ryan Buckett, 51, Deputy Mayor David Eggleton, 61, and Jamie Samson, 34, came along.

Councillor Miller was ill but Councillor Hinton admitted she had “chickened out”.

She said: “I heard the wind outside and thought, ‘absolutely not’. I’m a chicken and an absolute disgrace. I bow down to Carl and the others who took part — it was a fantastic effort.

“What I will do for next year, assuming that it goes ahead again, is get myself sponsored so I have absolutely no way out.”

The four men, who are all from Henley, spent the night in sleeping bags in the entrance to Superdrug.

The Henley men were visited at about 10pm by comedian Russell Brand, who lives near Henley, and had come to read a story.

Because there were so few people, the men agreed it was unnecessary so Mr Brand congratulated them and had selfies taken with them instead.

Mr Samson, who lives in Greys Hill with his wife Nicola, 34, and their baby son, said the night was tough.

He said: “It was a real eyeopener because of the way I did it. I didn’t want a nice duvet but wanted to experience it as someone homeless would experience it.

“It was really cold and wet. It’s crazy that people actually have to spend their evenings like that.” Mr Samson noticed that some people would deliberately avoid eye contact as they walked past.

He said: “That was another eye-opener. They probably didn’t know we were collecting for charity.”

Other people did stop and spoke to the men. Mr Samson said: “There were two young lads who gave us £14. They were really nice.”

The men also received £30 from a group who had been to see a show at the Kenton Theatre.

Mr Williams, who lives in Reading Road with his wife Katie and three children, said he was disappointed more people didn’t join in.

He said: “I probably didn’t promote it as well as I should have done.

“I only had a couple of weeks to put it together and a lot of people have things organised well in advance.

“I just thought it would be nice for the Henley community to join in an international event.”

He managed to stay warm but did not sleep well.

Mr Williams said: “I had about 10 layers on but my feet got wet when it rained.

“The main thing that kept us awake was the noise. The wind was blowing against the flagpoles and people were driving by on the other side of the square. At about 3am a shop alarm sounded and lasted for about an hour.

“We all got little bits of sleep but we are lucky because we got to go home on Sunday morning and have a nice hot bath and a bit of breakfast. If you’re homeless you can’t do that,”

To make a donation visit https://bit.ly/2LFCDKM