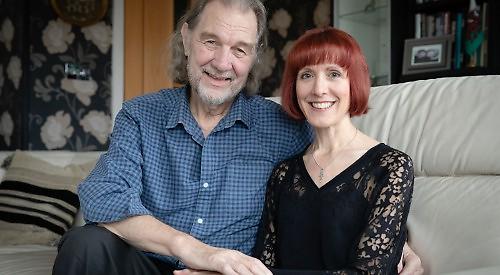 THE widow of a man who was cared for in his final days by Sue Ryder is urging people to support the charity through the coronavirus outbreak.

John Downing, 79, who lived with Anita D’Attellis at their flat in Reading Road, Henley, died at home in accordance with his wishes on April 8.

The retired press photographer was diagnosed with mesotheliomia, a type of lung cancer, in December 2018 and spent his final months compiling a book of highlights from his Fleet Street career of more than four decades.

Now Mrs D’Attellis, a music teacher and professional pianist, is encouraging donations to Sue Ryder’s emergency appeal, which it launched last month to help it survive the national lockdown.

It has been forced to close its shops, including the branch in Duke Street, Henley, as they are “non-essential” businesses and call off all fundraising events.

The charity, which runs the outpatient palliative care “hub” at Joyce Grove in Nettlebed, had warned it could have to stop its services within months as it is losing money.

Chancellor Rishi Sunak has since announced a relief package for the charity sector but Sue Ryder says it will still struggle without support.

The hub runs a 24-hour telephone advice line and also sends nurses to patients’ homes and says this service is facing increasing demand.

The charity used to operate an inpatient unit with six beds at Nettlebed but closed this in March, saying it was not viable due to less demand. Mr Downing and Mrs D’Attellis approached Sue Ryder last autumn after oncologists said he was too unwell to undergo further chemotherapy to hold his condition at bay.

The team initially phoned every fortnight or so to check on his welfare but this progressed to weekly and eventually daily visits as his health declined.

As the scale of the global covid-19 outbreak became apparent and rules on personal contact tightened, they continued to visit while wearing face masks and other equipment to protect themselves from infection.

Mrs D’Attellis says this was invaluable as she could no longer ask friends to help with daily tasks or meet them face-to-face due to social distancing regulations.

She said: “I was absolutely devastated to hear that the charity was struggling because I couldn’t have kept going without them. I would hate to think of them closing.

“We had a whole team of nurses coming to the house over the last few months, often several times a day towards the end, because John needed that level of care, especially once he was bed-bound. They treated him with such respect and dignity and I knew he would be comfortable every time they came. I hadn’t realised what a big organisation it was — there were so many people visiting but they were all lovely.

“They didn’t like having to wear masks because it made their jobs slightly harder. It’s important for them to be personable and they felt having the masks wasn’t as nice for John but it was necessary.

“Everyone’s wishes are different but John wanted to die at home and that became even more important after the coronavirus. If he’d had to go to a hospital or hospice I couldn’t have spent that time with him.”

Mrs D’Attellis said the team’s willingness to help with little everyday tasks was as crucial as their specialist skills.

“They have the medical knowledge but they’re also so caring and supportive. For example, in the final days I didn’t even want to leave John’s room, let alone the house. When I needed to go out and pick up some of his drugs, a nurse he’d always got on well with was able to sit and chat to him until I came back.

“Like all nurses, to them it’s not just a job with tasks to complete – they care about patients as human beings and take the time to talk and answer questions.

“They also offer bereavement counselling, which I wasn’t aware of and while I haven’t used that it’s good to know it’s available if you need it. It offers that extra peace of mind.

“Sue Ryder has been helpful in so many ways and I want to ensure that help is available to anyone who needs it in the future. There are still people who are going to become ill, even without the added complication of this lockdown.

“I’ve spoken to friends and neighbours who have only good things to say about them. They’ve touched so many hearts.”

Mrs D’Attellis has so far raised more than £4,000 in donations from friends and family in addition to the £1,500 she raised through a winter recital series last year.

She said: “It’s very poignant and I’m really delighted with how well it has done. It’s difficult to make plans at the moment because there’s so much uncertainty but I’m determined to raise money for them in other ways when the lockdown is over.”

Mr Downing worked for the Daily Express for 40 years and was a freelance for several years thereafter, visiting many foreign war zones and humanitarian disasters.

He was made an MBE for services to journalism and awarded numerous industry accolades before retiring in 2005, a year after meeting his wife. They married in 2007 and moved to Henley in 2012.

A Sue Ryder spokeswoman said the appeal had so far raised about £62,500 towards the Nettlebed hub but the facility would by short of £1.5 million in 2020 because of the disruption.

It costs £3.1 million a year to deliver its services across South Oxfordshire and only a quarter of that comes from statutory funding.