Girl donates 1ft of her hair to children’s cancer charity 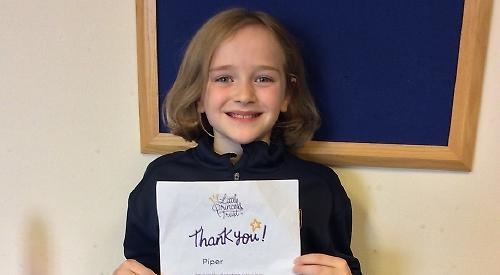 A GIRL from Henley has donated 1ft of her hair to charity.

Piper Seddon was supporting the Little Princess Trust, which makes real wigs for children who are undergoing cancer treatment.

The eight-year-old, a pupil at Rupert House School in Bell Street, Henley, remembered how two classmates had done the same thing some years ago and suggested she should follow suit when her mother Jillian said she needed a haircut over the summer.

Mrs Seddon said: “Her hair had got very long and she felt it would be a nice opportunity to help other children. We’re fortunate not to have cancer in our family but Piper appreciates that others aren’t as lucky.”

Piper had her blonde locks cut at the Renaissance hair salon in Marlow. Mrs Seddon said: “She was nervous on the day of the cut but also excited.

“Because of its length beforehand, the difference was really noticeable — you don’t realise how short ‘short’ will be until they start cutting.

“Piper was all smiles afterwards and she says her new style is more hassle-free. A lot of adults have been complimenting it as well as children. I’m very proud of Piper because she has such a caring attitude and this is very much a reflection of her personality.”

Piper, who was presented with a thank-you certificate by the trust, says her friends liked her shorter hair and some said they would like to follow her example.