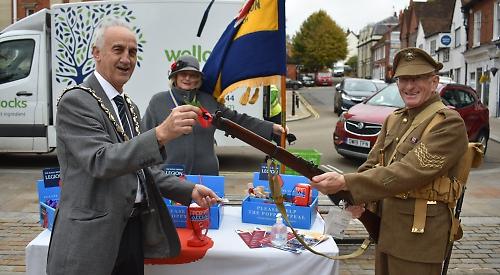 A LOW-KEY launch marked the start of this year’s Poppy Appeal in Henley.

Mayor Ken Arlett bought the first poppy at a ceremony in Falaise Square on Saturday which was small and socially distanced due to the coronavirus pandemic.

He picked it up from a table rather than being presented with it and made a donation of £20.

He was accompanied by officials from the Henley and Peppard branch of the Royal British Legion, chairwoman Anne Evans, president John Green and appeal organiser Annie Arscott. Mr Green, who wore an original First World War soldier’s uniform, presented Cllr Arlett with a poppy on the end of a replica rifle.

This yea, the Legion’s volunteers can’t collect door-to-door because of the risk of spreading covid-19 but they hope to make up for it by placing more poppy trays in shops and other public spaces.

Mrs Evans encouraged people to donate. She said: “It’s incredibly important, almost more important this year. It’s the Legion’s biggest fundraiser of the year. I’ve got every confidence in our local community that they will really step up to the mark and do what’s necessary.”

Mrs Arscott said: “As ever, raising funds for the Royal British Legion is not just for servicemen and women, it’s for their families and non-service people who support them. Money is going to be down this year as we’re not going to be able to do street collections and house-to-house. We’re looking at different ways for people to donate and we’re asking people to put a little bit more thought into how they donate.”

You can buy a poppy online at www.britishlegion.org.uk