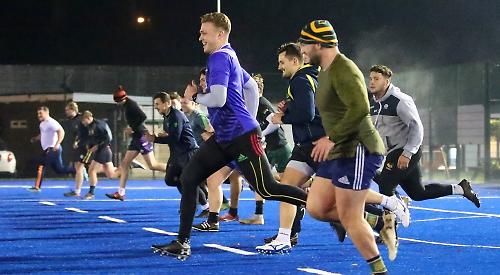 Participants are encouraged to sprint a distance of 22m, chosen because of the 22m line on a rugby pitch, as many times as they can in three minutes and 45 seconds.

When they have finished, they donate at least 22p for each successful run to Looseheadz and Brave Mind, both of which aim to reduce the stigma surrounding mental illness.

Runners are encouraged to film their efforts while playing the song 22 by rock band Deaf Havana, whose record label has allowed the track to be used. Alternatively, they can take a selfie afterwards and post it on the club’s social media channels with their time. They should also nominate three friends to have a go.

The entire Henley Hawks first team tackled the challenge at a recent training session and several players have also completed it individually, as have a number of juniors. Katherine Hyde, the club’s social media manager, who helped to come up with the idea, said: “It has been a difficult year for so many people and playing sport is a big release from stress.

“However, it has become harder to take part in it at a time when mental health is more important than ever. We thought this could help the situation while supporting good causes.

“People have already started doing the challenge and I’m sure it’ll keep growing. We’re hoping some high-profile players will do it, although we’d like it to take off outside the rugby community.

“My husband David plays in the second row for the Hawks and he hates running but he absolutely loved it.

“He managed 28 runs, which is similar to what some of the other players have managed while some juniors have done 25.”