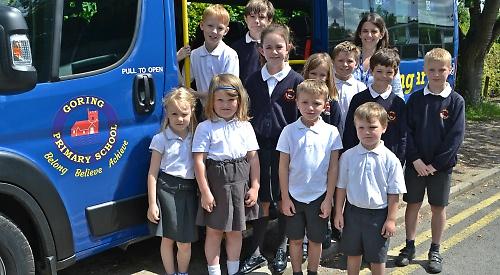 THE headteacher of Goring primary is hoping to run 100km in two months to raise money for the school.

Angela Wheatcroft also hopes to publicise the Goring 10K Your Way virtual challenge on March 28, which the parent-teacher association is organising to replace the usual 10km race that it holds.

The annual event, which attracts up to 1,200 runners, had to be scrapped this year because of the coronavirus pandemic so the Wallingford Road school was set to miss out.

Proceeds from previous races have paid for new IT facilities, playground markings and a new £30,000 minibus.

Other fundraising events due to be held over the past year, including discos, quiz nights and craft fairs, have also had to be called off.

People entering next month’s virtual race can walk, run or cycle a 10km route of their choice as long as they obey rules on social distancing and “bubbling” to prevent the spread of covid-19.

Alternatively, they can sponsor Mrs Wheatcroft.

So far, the event has raised almost £3,800 and dozens of families, including those with children at the school, have signed up, along with most of the staff.

Mrs Wheatcroft chose to run 100km as she is a keen swimmer who switched to running because pools have been closed under government restrictions for much of the past year.

In the weeks before the 10km she will go on a series of training runs over shorter distances.

Mrs Wheatcroft, 55, who lives near Reading, said: “I recognise that a single 10km run is a big achievement for a lot of people but I’m fortunate that I’m fit enough to run one at any time.

“I felt that if I was going to be asking friends and family for sponsorship, I should really be pushing myself out of my comfort zone and this felt tough but manageable.

“I’ve got the first few runs out of the way and I’m feeling energised about the rest of the challenge, which hopefully will last.

“There’s now pressure, in a good way, to keep going with it. People have already started sponsoring me so there’s no backing out.

“Having a goal and a good reason behind it will keep me going and I find that running in the morning energises me for the rest of the day. I even love it when it’s dark or raining.

“I’m not fast by any means — I take it slow and steady and run little and often but it’s great for wellbeing.”

Mrs Wheatcroft hopes the virtual run will make up for the school’s lack of fundraising opportunities.

She said: “The decision to cancel was taken some time ago because the PTA needs to apply for road closures well in advance and the national picture wasn’t looking promising.

“It’s not a school event but it’s run by our parents and the proceeds benefit our children by improving and enhancing what we offer.

“It pays for so many extra things that make a big difference.

“I’m always amazed at the effort which the committee puts into it, from planning to marshaling on the day, and I know their contribution has always been valued.”

The school is considering a gradual refurbishment of its Sixties buildings, which an independent inspection confirmed were in poor condition.

A proposal to relocate the school has fallen through.

• The Woodcote 10km race, which takes place in early January every year in aid of Pangbourne Rotary Club, was also called off this year.