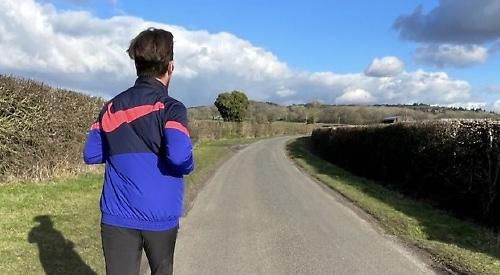 A MAN from Wargrave ran and cycled nearly 300 miles in a month for charity in memory of a former work colleague.

Phil Mockett, a marketing director at BWP in Marlow, used to share lifts to work with the man for many years until he took his own life in January.

Mr Mockett wanted to do something to honour him and decided to run 131 miles in 20 days in February and cycle 160 miles in the remaining eight days.

He chose to support Papyrus UK, a suicide prevention charity with a particular emphasis on young people.

Mr Mockett, 31, said: “I know everyone is going through tough times at the moment but I genuinely didn’t think that would happen to anyone I know.

“I did some research and found out that suicide is the biggest killer of young people.

“I reflected on it and I thought, ‘You spent an hour in the car with this guy nearly every day for five years and he killed himself but where were you to help him?’ and that’s why I felt like I wanted to do it.

“Nobody talks about it until it happens and I just couldn’t get my head around that. I wanted to raise some money to remember him and bring some awareness to the charity.

“Suicide is a taboo subject so it is important to turn a spotlight on it. I would maybe like to work for a charity like that in the future.”

Mr Mockett, who ran the Brighton Marathon in 2014, liked to run in the morning and would go along School Lane, Twyford Road, the A4 and Blakes Lane. However, when he was busy with work, he had to run in the evening instead.

After a few days of running on concrete, he got pains in his knees so he interspersed it with cycling but this was often uncomfortable too due to the cold.

Mr Mockett said: “I thought running every day would kill my knees. I’ve never had a knee injury but you always hear people say that road running is bad for your knees.

“After a few days they started to hurt and I pre-empted that by cycling. I would have thought doing a two-hour cycle over an hour of running would have been a lot easier but because the weather was so cold in February I found it really hard.

“The cycling was supposed to give me a rest but it didn’t work out like that.”