New IT system at day centre thanks to charitable trusts 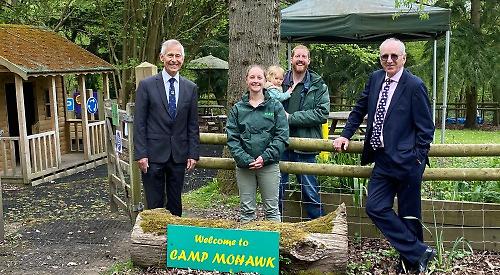 A CHARITY which cares for children and young people with special needs has been supported by two trusts.

The IT system at Camp Mohawk in Highfield Lane, Wargrave, needed upgrading at a cost of £3,400.

The Prince Philip Trust Fund and the Louis Baylis Trust funded the work equally to ensure the charity’s administration runs smoothly. The new system includes a server and three laptops.

Tina Jacobs, fundraising manager at Camp Mohawk, said: “The charity has been in existence since 1980 and over the years we have been given old laptops from generous donors.

“We’ve never looked at the system before and it wouldn’t be an exaggeration to say it was taking 10 minutes for something to boot up, so it had reached the end of its useful life.

“This will allow us to be much faster and more efficient for staff and families to access our services.”

She added: “We couldn’t do what we do without the support of organisations like the Prince Philip Trust Fund and the Louis Baylis Trust and we are so grateful.”

The IT system at Camp Mohawk is a crucial part of the charity’s operation as it allows staff to manage the bookings for more than 1,000 children and to connect with potential donors and apply for grants.

Although the centre has been open during the pandemic, the capacity has had to be greatly reduced to comply with social distancing rules.

The Prince Philip Trust Fund, which was founded by the Duke of Edinburgh in 1977, typically supports projects in the Royal Borough of Windsor and Maidenhead.

However, the day centre in Wargrave helps children from across the South-East.

The trust has supported more than 1,600 causes and given out almost £2 million and its work continues despite Prince Philip’s death earlier this year.

Ross Wilson, treasurer and trustee, said: “Prince Philip was not only an inspirational chairman and patron, he was a leader and a pragmatist and he could see the power in working together for the benefit of others. I am certain he would be delighted to know that his legacy lives on.

“While we mourn his passing and miss his leadership and good humour, I am pleased that we can continue his work for the benefit of others.”

The Louis Baylis Trust is the charitable foundation of the Maidenhead Advertiser.

Meanwhile, Camp Mohawk is running a summer raffle in a bid to raise funds. Prizes include dinner at the Horns pub in Crazies Hill, luxury hampers, watches and perfume.

It costs £5 for 10 entries into the raffle and tickets will be available until June 18, with the draw taking place two days later.