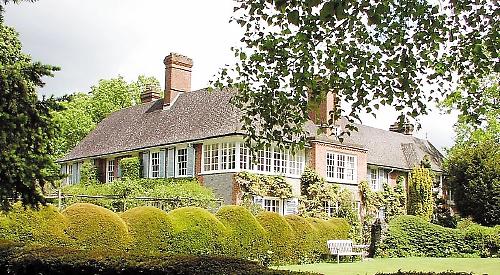 THE café at Nuffield Place has been permanently closed because it was not making enough money.

The National Trust, which runs the visitor attraction, says the coronavirus pandemic has had a “significant” impact on its finances.

The café was forced to close for much of last year due to the lockdown restrictions and the house was only re-opened to the public last month.

A spokeswoman for the trust said it had been forced to look at every area of the organisation to safeguard its finances.

She said: “At some locations food outlets were operating at, or close to, a loss and we do not believe that it is the best use of our charitable funds to support these outlets. Therefore we have regrettably had to close the café at Nuffield Place.”

Visitors are advised that they are welcome to bring a picnic with them and space has been made available on the lawn and on the tennis courts.

The café at Greys Court, near Rotherfield Greys, which is also owned by the trust, will remain open as usual.

Nuffield Place is the former home of William Morris, later Lord Nuffield, from 1933 until his death in 1963.

The philanthropist, who designed the Morris car, bequeathed the property to Nuffield College in Oxford, which he founded, and it was later offered to the Trust.

From 1977, the house had been open to the public by volunteers for very limited times between May and September.

The trust says visitor numbers to Nuffield Place and Greys Court have remained “consistent” since they were allowed to re-open in line with the restrictions.

It has reduced the number of people it can admit at one time and has introduced a booking system in order to comply with social distancing rules.

The spokeswoman said: “Our visitor numbers remain consistent with the peak days we saw pre-pandemic, levelled out across the week thanks to the safety measures in place.”

Volunteers are being welcomed back in stages to undertake essential tasks such as maintenance, which continued during the coronavirus lockdowns.

The spokeswoman added: “We are very grateful for the passion and understanding that all of our volunteering community has shown during this difficult time.”

Meanwhile, planning permission to turn a former pub in Nuffield into a “creative hub” with workrooms, classes and a café has been granted.

The Crown, which is Grade II listed and has been shut since 2013, will be transformed into a mixed-use building called the Maker Space.

A workroom will host craft classes and demonstrations across while a café will provide drinks, snacks and light meals. A retail space would also stock craft supplies and sell handmade items by local people.

Only the café might open initially and could host exhibitions as part of the Henley Arts Trail, which runs from July 10 to 18.

The couple bought the property in May last year and were granted permission to convert it by South Oxfordshire District Council in September.