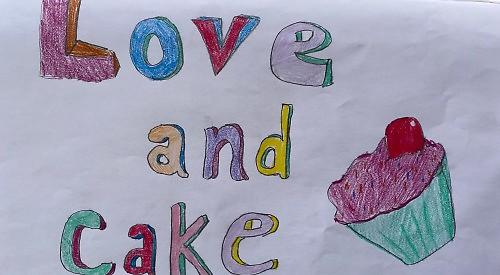 A BOY raised more than £400 for two charities by selling cakes.

Cassius Cartland, nine, sold cupcakes, cookies, cold drinks and strawberries outside his home in Lower Shiplake with help from his brother Max, eight, and Marcie, five, and some friends.

Cassius, who goes to St Mary’s School in St Andrew’s Road, Henley, set up his stall, called Love and Cake, on the verge.

He said: “It was a really fun day and I enjoyed spending it with my friends doing something important. I think it went much better than planned.”

His parents, Andy and Kate, were impressed with his efforts. Mrs Cartland, who helped make the goodies, said: “I’m surprised they didn’t try to sell the chairs they were sitting on.

“All the children worked together doing shifts on the stall and contributing to a wonderful atmosphere. We had ultra-marathon runners who assumed we were the official refreshment station for their event and picked up two cookies.

“They had no cash on them but after hearing they had already run 49 miles and because they looked like they really needed those cookies, we put in a few pounds for them.

“They did send a steward back 10 minutes later with a donation of £5. It was a great community event — we met neighbours we hadn’t met before and even a delivery driver stopped by on his busy shift to buy a cake.

“Cassius was really chuffed, which was really nice. He has an unfiltered view of the world — he wants to raise money to fix it. It’s very straightforward for children so he thought, ‘Let’s do a cake sale’. Cassius is very good once he has an idea in his head and he lets people know about it. He handed out posters in school a few weeks before.”

Cassius has asked his parents if the sale can become an annual event. “He always has an idea on what he wants to do next,” said Mrs Cartland.