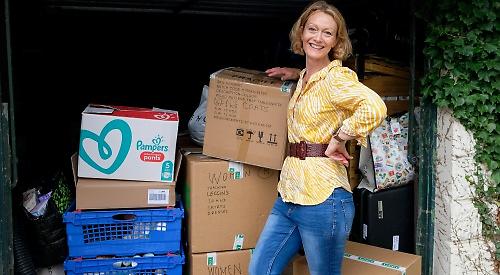 ABOUT 20 women volunteered to sort donations for Afghan refugees.

They met at the home of Emma Clark Lam in Paradise Road, Henley, on Friday and went through hundreds of items.

Mrs Clark Lam is working with Sam Jonkers, from Lower Assendon, collecting donations for the refugees who have been brought to Britain after the Taliban took control of their homeland.

Mrs Jonkers is regional lead for the Care4Calais refugee crisis charity, which is appealing for donations of clothes and basic essentials.

The clothes and toiletries will be handed out a special event in Reading, organised by the charity.

Mrs Clark Lam said: “I have to say, when all the donations were piled up in the morning and we were still getting more on the day, I thought ‘How on earth are we going to get through all this?’ but we did it.

“There was a really lovely and positive vibe. We had Abba music playing and everybody was really efficient and compassionate. It was community spirit in action and I was really moved by it.

“I felt like I was leaning on my friends and neighbours by getting them involved but a lot of them said thank you for giving them the opportunity to help, which was great.

“It’s a really lovely and heartening to see people respond to these human issues and they are able to imagine how awful it must be for the refugees. These people have seen their lives closed down, particularly the women. It is an awful culture shock.”

Mrs Clark Lam, a freelance writer, said there was a good mixture of clothing for men, women and children but more toiletries and second-hand mobile phones were needed.

She is still hoping to find somewhere locally to store donations.

She said: “We’ve not had any offers yet and I’ve had to pause general donations for the time being because I’ve ran out of space.

“We ended up with at least 15 huge packing boxes, three crates, lots of cardboard boxes and big bags. It’s all sitting in my garage and we are hoping to distribute some of it this week. I won’t be able to get all of it in my car and we will probably need a small van.

“We hold special distributions where we invite refugees along. We bring them into a hall and have tables laid out and they can select a certain amount.”

Mrs Jonkers said: “The Henley group have probably had the greatest number of new volunteers of any of our contingent.

“There’s still quite a lot of sympathy in the community and people really want to get involved and do something. We are still short on certain items. The easiest way to help is to donate to our fundraiser but we are still looking for lots of toiletries, colouring books and small card games. We need hundreds of them.

“We are not particularly looking for second-hand clothing at this point as sorting takes us a long time.

“We had the most fantastic donation of beautiful ethnic clothing from a mosque in Earley so we will be giving those out, which will be nice.

“We are still sorting through donations and setting up extra English classes and trying to arrange social activities.

“More volunteers would always be helpful and particularly anybody that can offer entertainment. The families are stuck in small hotel rooms and we would like to find people that can offer sports clubs or boat trips to give them a group activity.”

“We had one or two offers of space in people’s homes but that’s what we have already and we are looking for something on a much larger scale,” she said.

Meanwhile, South Oxfordshire District Council, which is be responsible for housing the refugees, has thanked the public for a huge number of donations.

Although the call for general donations has been paused, residents who wish to help may be able to do so through an Amazon wish list that will be created for specific items.

County council leader Liz Leffman said: “The people of Oxfordshire have been incredibly generous in their response and many of the items they donated during August have been put to good use with the people who have arrived in our county.

“We are now at a stage where we don’t need further donations of items. However, there may be occasions in future when we need very specific items to meet specific needs as families go through the very gradual process of adapting to their new surroundings away from their home country.

“We thought an Amazon wish list would be an ideal way to get a message through to our kind-hearted residents if and when we need specific items quickly.

“We are very limited in the extent to which we can give a commentary on the process we are going through with the refugees because we don’t want to reveal the locations at which they are being homed.

“They have been through a traumatic experience and they are now in an entirely new country. They will need to adjust and we need to give them the time, space and peace to do so.”

To make a donation, visit care4calais.org/donate-now