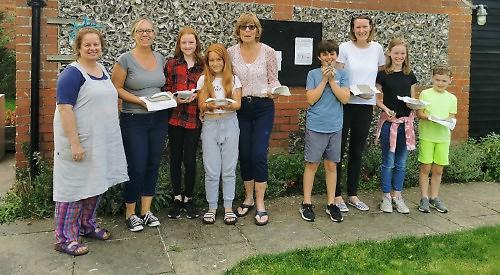 AN artist raised almost £400 for charity by holding a pottery day.

About 42 people attended and were invited to prepare clay, cut out tile shapes and decorate their creations using wooden stamps, leaves and lace.

A total of £377.62 was raised for the Alzheimer’s Society, a care and research charity for people with dementia and their carers.

Mrs Page said the charity had a special place in her heart as her parents are supported by their local branch because her mother has dementia.

She said: “This was especially important to them during the lockdowns of last year. My sister, Helen, ran the London Marathon in aid of the Alzheimer’s Society and I wanted to help too but without the running.”

She said the participants were aged from four upwards.

“I think I’m safe in saying everyone had a fun time,” said Mrs Page. “Other people also very kindly donated, even though they couldn’t join us on the day. I couldn’t have done this without the support of my neighbours and friends, so I want to thank everyone, especially Caroline Aldridge for helping throughout the day.”

A raffle was also held at the event. A moon jar made by Mrs Page was won by villager Kate White and a pasta maker donated by Caroline Aslan was won by fellow resident Nicky Layfield.