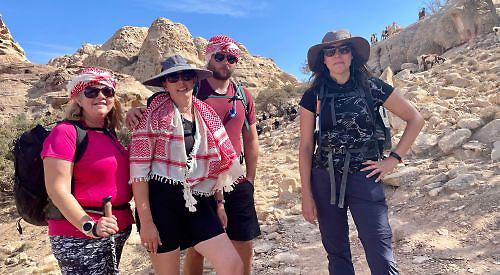 SIX people completed a desert trek in the Middle East and raised more than £15,600 for a Henley charity.

The challenge took place last month, having been postponed for 18 months due to the coronavirus pandemic.

The group walked for up to 10 hours a day in an average temperature of 32C, covering between 10 and 15 miles daily.

They went up and down canyons, across rocky hamadas and along ancient Bedouin paths with scenery ranging from waterfalls and lush canyons to barren, lunar-like
landscapes.

Mrs Barcella, who is a life coach and a community fundraiser for the charity, said: “Like most of the world, Jordan has been more or less closed to tourism for the past 18 months and this was the first trekking expedition that the local crew had taken out for two years. It felt like a celebration.

“It was amazing to meet them — we all felt like we became part of the family there.

“We were treated with such kindness and warmth and we were amazed by the incredible food that was produced in the most remote of locations.”

Mrs Barcella, who lives in Marmion Road, Henley, with her husband Marco and children Raffi, Callie and Anya, was surprised by the landscape.

She said: “You’d expect a desert to be a vast, barren landscape, which some of it was, but when you took the time to look around, you could see little flowers sprouting from the crevices in the ground. There were hills, waterfalls and luscious valleys of green.”

The Jordanian guides helped cook and set up camp each night and the walkers slept with them in large Bedouin tents or outside in the open.

Mrs Barcella said: “The guides would dig a fire pit in the ground to create a barbecue and we’d have baba ghanoush [chargrilled aubergine] and Persian hummus. The food was similar each day but it was wonderful.”

She decided to sleep outside every night, despite various creepy crawlies and the temperatures falling to about 10C.

“You don’t sleep too well anyhow,” said Mrs Barcella. “It wasn’t the most comfortable as you could feel the rocks underneath you but the stars were amazing.

“The fire at the camp does deter scorpions and bugs but one night I could hear howling up in the mountains, so there may have been wolves nearby, or wild dogs.”

Each morning the group were told to check their boots for critters as the desert is infamous for camel spiders, which seek shade from the sun.

Among the places they passed through were Wadi Rum, which is known as the Valley of the Moon, and Petra, which features intricate carvings of faces in the rock and is home to various temples and caves.

The area was made famous by the 1962 film Lawrence of Arabia.

Mrs Barcella added: “Our tour guides took us to the temples at night. They were lit up with candles and we explored the caves too.”

Mrs Ainslie, from Wokingham, who is head of fundraising for the Chiltern Centre, had raised more than £2,500 with a 100km “practice” walk in September to help finance the trip.

She said: “I have been to Egypt before but Jordan was so different — it has quite a mountainous landscape with trees and waterfalls.

“The best day was the first one because we didn’t know what to expect.

“The second day, with the heat bearing down, was certainly the most difficult. We just kept climbing and climbing for hours on end. We were exhausted from the heat but had to keep going.

“I had to remind myself what we were doing, why it was so meaningful and how hard the carers work for the individuals at the centre.” Kaley Hayes, 34, a parenting coach who lives in Greys Road, Henley, has supported the Chiltern Centre for many years.

She was 20 weeks’ pregnant with her second child so had to ensure she remained hydrated and rested enough to sustain herself and her baby.

She said: “When I signed up for the challenge back in 2019, we had expected to leave in May 2020. Of course the pandemic had different plans so we postponed again and again.

“I was obviously delighted when I found out I was pregnant but a little anxious about the trip.

“After consulting with my midwife, doctor and the doctor for the expedition company I felt comfortable that it was safe.

“But there’s no doubt it made the whole trip challenging. The heat and the continuous walking for so many hours really took it out of me and I was so conscious of keeping myself and the baby safe.

“Luckily, we had a local mule called Shakespeare who travelled with us and we got to know each other pretty well so I would hitch the odd lift.

“It was pretty daunting being on a cliff edge on a donkey but Shakspeare became a part of the team and we enjoyed walking together, whether I was on his back or alongside him.

“He wasn’t the most considerate when it came to low-hanging branches and trees — I had to contort myself to stay put.

“I actually had more bruises and injuries from riding him and sprained my wrist when I slipped on loose rocks while trying to mount him.

“It was worth it for some of the views. At one point we were surrounded by ancient Roman ruins and Neolithic sites while we could see from Israel to Saudi Arabia and the Sahara Mountains. It was incredible.

“I’m so glad I chose to push myself, stretch out of my comfort zone and do something that was so fulfilling for me and of value to the Chiltern Centre too.”

Mrs Purver, 41, who works in events and lives in Shiplake, said: “What an adventure from start to finish and what an amazing country Jordan is. We really felt the warmth from the sun and the people.

“It was an inspiring experience, exhausting and exhilarating as well as deeply emotional — an experience that we are already looking to repeat but maybe somewhere colder next time.”

Mr Collins, 29, is also from Shiplake and works in construction. Ms Mayer is a student from Bristol and a friend of Mrs Hayes.

Mrs Barcella said: “It was such a privilege to be part of this team and raising funds for a charity that means so much to me.

“I have worked for the Chiltern Centre for seven years and I have seen the extraordinary impact that our care team has on the lives of young people with disabilities.

“Every day that we were away I felt so grateful to be able to join an expedition like this.

“For parents of young people with disabilities, it is so difficult to get away even for a day or a night because it is so hard to find a space that their children can be safely and happily looked after. The Chiltern Centre provides that space.

“The money raised will genuinely change lives so thank you to all the other trekkers and to all the friends, family and local businesses who supported us.”