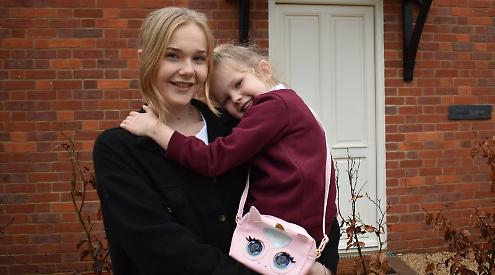 TWO new houses built by the Henley and District Housing Trust were officially opened on Monday.

The cottages in Greys Green are named after two men who donated houses to the trust and their sons, Tristan Phillimore and Sir Hugo Brunner, attended the ceremony to hand keys to the tenants.

The trust was founded in 1929 to build and provide housing for those in need. It now provides housing for social rent, which is about half the market rate.

Sir Hugo presented the keys of Felix Lodge to Susie Longshaw, from Sonning Common, who has moved in with her five-year-old daughter Isla.

The house is named after Sir Hugo’s father Sir Felix Brunner, who was a Liberal Party politician and chairman of Henley Rural District Council from 1954 to 1957.

The property replaces Felix House in Sonning Common, which Sir Felix donated to the trust and was sold for development to raise funds.

He also donated the five cottages which are adjacent to the new cottages.

Mr Phillimore presented keys to the tenant at Phillimore Cottage, which is named after his father, Lord Francis Phillimore. The properties are the first new homes the trust has built since the Nineties.

They were built by Stephen Butler and Brian Proctor, of Butler & Proctor in Checkendon, who also attended the ceremony. Also in attendance were Lady Alvingham, a former chairman of the trust, the Mayor of Henley Sarah Miller, Jo Robb, who chairs South Oxfordshire District Council, the neighbouring tenants and the families of the new tenants.

John Hives, chairman of the trust, said: “We wanted to mark the opening of these two houses and we’re delighted to have this addition to our housing stock, which now numbers 75 properties.”

Sir Hugo said: “It’s a pleasure to be in Greys again on behalf of my family. I have known the trust for many years — my mother was one of the chairs. These houses are a wonderful addition.”

He gave Ms Longshaw a copy of his book, High Explosive, a collection of his father’s letters from the First World War, asking her to display it in the house and leave it for the next tenant when she departs.

Ms Longshaw, who works at the Hot Gossip coffee house in Henley, said: “We’re settling in really well. The house is all sorted and we’ve got normality back. Isla is settling in well at school.

“I want to say a massive thank-you to the housing trust — we can now build a proper family home.”