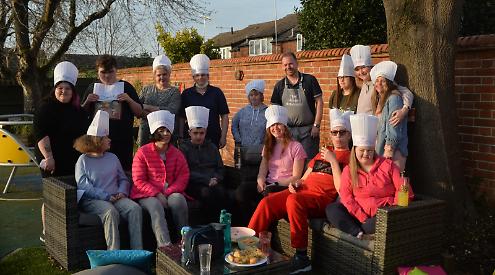 A CHEF spent an afternoon making pizzas with youngsters at the Chiltern Centre in Henley.

Simon McKenzie showed a dozen teenagers how to prepare them, including rolling out the dough and chopping up vegetables, in the garden at the centre off Greys Road.

The youngsters all wore chef hats with their names on and could choose their favourite toppings. Mr McKenzie, who has worked with top chefs including Gordon Ramsay and Marco Pierre White, then cooked the pizzas in an oven.

He cooked a total of 20 pizzas ranging from plain cheese to pepperoni and mushroom and one gluten-free version.

He said: “It was out of my comfort zone but really good fun. The kids seemed to enjoy it.”

Mr McKenzie, who runs an in-home fine dining service, has been supporting the Chiltern Centre for disabled young adults since February by asking his customers to add a two per cent donation to their bills which he matches.

He said: “It is just as important to donate time as well as money. Whether it’s salad, pizza, or a dinner with friends, food brings people together. The Chiltern Centre helps to really make a difference.”

Alison Spary-Hawthorn, team leader at the centre, said: “Simon’s support is massive as it allows us to do so much stuff that wouldn’t be possible otherwise.”