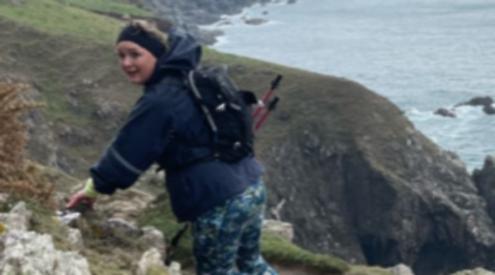 A WOMAN who completed a 50-mile fundraising trek in in aid of the charity that helped her beat a brain tumour says it w as “a once-in-a-lifetime experience”, writes Martin Trepte.

Sarah Hollins, from Rotherfield Greys, walked along the Devon coastline with friends Mel Howarth and Charlotte Pudney and raised about £7,000 for Brainstrust.

The charity supports patients and their loved ones and funds vital research.

Last year Mrs Hollins, 46, who lives in Rocky Lane with her husband Chris and children, George, seven, and Grace, six, underwent surgery twice for a tumour.

After making a full recovery, she wanted to do something to help other people and decided to raise money for the trust.

Mrs Hollins said: “That amount of money will make a huge difference. Brainstrust sends out what it calls ‘brain boxes’ to people full of information for patients and carers. The money will pay for them for an entire year and beyond.”

The trio travelled to Dorset on Friday for the trek over the weekend.

Setting out at 7am and finishing about 5.30pm each day, their route started in Dartmouth and took them along one of the most spectacular stretches of coastline in England, the South-West Coastal Path.

Mrs Hollins said: “It was amazing, a once-in-a-lifetime experience. The scenery was stunning. It really showed what the English countryside is like.

“It was quite hard and hillier than we thought it was going to be. We did 50 miles and 100,000 steps and the elevation was the equivalent of doing Ben Nevis twice. Thankfully, we had all the right equipment, and the walking poles were very much needed. Everything stiffened up a bit afterwards!”

Mrs Pudney, 50, from Peppard Common, added: “It was certainly one of the hardest challenges I have ever done. When we felt we could not carry on we would look at Sarah and think, ‘Crikey, if she can keep going, so can we’.”