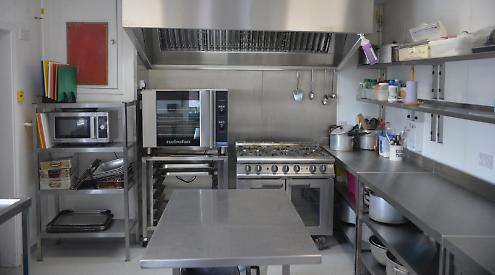 A NEW catering kitchen has been unveiled at the 60-Plus Club in Henley.

The work was carried by kitchen specialist Caterplan, of Hannington, Hampshire.

The official opening at the club in Greys Road car park was carried out by Mayor Sarah Miller, who cut a red ribbon and unveiled a plaque by the entrance to the kitchen.

The ceremony was attended by fellow town councillors, members of the club and those who sponsored the new kitchen. Councillor Miller called the new facility “fantastic” and said: “Huge thanks to everyone who has sponsored this kitchen.

“The club is invaluable to people in Henley and it is so nice to see it so busy.”

The sponsors include the Tony Lane Foundation, the Henley Municipal Charities and the Shanly Foundation as well as individuals such as estate agent Giles Robinson and financier Urs Schwarzenbach.

Gill Dodds, who chairs the club, said: “The whole thing started as a conversation before lockdown about wanting to do something substantial for the club and we decided upon a new kitchen.

“Then we had lockdown so it was very quiet for a couple of years but we started talking about it again at the end of last year.

“This is a professional standard kitchen so it cost a lot of money. It was only doable because of the generous investments.”

Mrs Dodds, a former mayor, also thanked the town council, which owns the building. “We are always grateful to them for the help they give is letting us be here,” she said. “They must be the best landlords in Henley.”

Councillor Ken Arlett, who helped the club to find a contractor, said: “I found a company called Caterplan, run by Dan Swindells, who was absolutely brilliant.

“There were many problems during the refurbishment, like when all the plaster came off the walls, but he dealt with everything really professionally.”

“The kitchen now looks fantastic and the new equipment will make such a difference.”

The club serves lunches on Mondays, Wednesdays and Fridays.