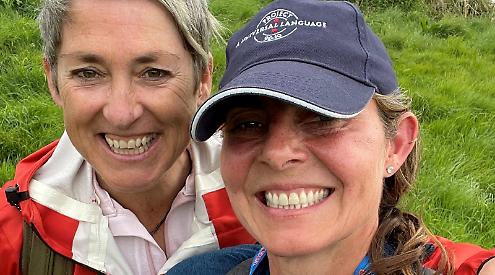 A CAMPAIGNER against child sex abuse has completed the latest in a year-long series of challenges.

It was her ninth challenge to raise awareness of Project 90/10, a charity she is setting up to combat child sex abuse through education, workshops and campaigns.

Ms Taylor said: “It was the toughest challenge I have ever done. On the Saturday the views were beautiful but the hills were difficult and as the day went on the fatigue set in and it was all about finishing, which I did at about 9.30pm. I had about five hours’ sleep and then set off again at 6am on the Sunday for another 12 hours of walking. It was rainy and over difficult terrain — we went through hills, mud baths and shingle beaches. It was pretty rough.”

She completed the first day alone but on the Sunday she was accompanied by a friend, Deni Corby, and her 13-year-old daughter, Betty-Mae, who walked 15km with her.

Ms Taylor said: “It was great having so much encouragement. I consider myself an extremely fit woman but I don’t think anything could quite prepare you for those hills. I guess if it was easy, it wouldn’t be a challenge.”

Her next challenge is a 70-mile circuit of the Isle of Wight which she will be tackling with another friend, Imogen Scott, from Shiplake, and she will finish in August with a wing-walk.

Ms Taylor has started a Parliamentary petition which calls for a debate on funding to support survivors of child sex abuse and now has almost 1,000 signatures.