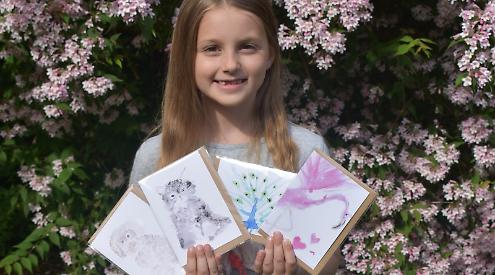 A GIRL has raised £3,000 for two charities which care for her brother by selling gift cards featuring her paintings.

Amelie Turnbull, seven, from Caversham Heights, has been selling the cards in shops in Caversham and Henley since October.

She has made £6000 so far and chose to donate half her profits to charities that help her 14-year-old brother George, who has lobar holoprosencephaly, a rare congenital brain malformation.

Amelie gave £1,500 each to Camp Mohawk in Wargrave, a multi-functional day centre for children with special needs, and the Music Club, which also supports young people with disabilities and meets at Woodcote village hall.

Amelie, a pupil of the Heights Primary School in Caversham Heights, said: “I thought I would only raise about £100 at the start and some of my friends don’t believe I have raised £6,000.

“I’m going to bring one of my cards in for show and tell.

“I draw things I love, like dogs and cats. I’m drawing a giraffe at the moment. My favourite animal is a guinea pig but I haven’t had a chance to draw one of those yet. So many people have bought the cards and it hasn’t even been a year.”

Amelie’s cards, which are printed on recycled paper, feature designs of peacocks, flamingos, dragonflies and hedgehogs as well as various flowers and plants, including watermelons.

She first started painting watercolours at her kitchen table during the coronavirus lockdown in 2020.

Her mother Davina said Amelie had always been creative but she was amazed when her daughter showed her the pictures she had done.

Ms Turnbull, 41, who works for the NHS, said: “In the summer when the schools are closed, we can’t go to the parks or the shops as George’s behaviour can be quite tricky.

“It means our other kids have become good at amusing themselves. Amelie has always been creative, making home-made slime and other things. We first realised she had talent for art when she was doing these amazing watercolour paintings. She had never had a lesson but was doing incredible pictures of animals and nature.”

When friends and family asked if they could buy the paintings, Amelie and her mother decided to sell them more widely.

Ms Turnbull, who lives with her partner Chris and her other son Harry, 10, said: “I was showing some of Amelie’s pictures to the lady who runs Nood Stores in Church Street, Caversham.

“I only showed it to her on a whim because she didn’t have any cards in her store.

“She was really interested, so I took Amelie to see her the next day. She ended up asking if we could make 150 of the cards.”

Ms Turnbull asked Higgs Group, publisher of the Henley Standard, to scan the designs and print the cards.

These are now being sold by Nood Stores and FourState in Duke Street, Henley, for £3 each or £10 for four.

Amelie has even started to accept commissions after one woman asked her to draw her cat that had died recently. Ms Turnbull said: “It makes me so proud to see Amelie being able to give something back to the people who have given us so much.

“She isn’t very confident — she’s a quiet little thing. I just hope that this will raise her self-value a little.

“I don’t think she quite understands how special this is. It has all gone slightly over her head. Hopefully, when she is older, she will appreciate what an amazing thing it was to do.”

Kate Wood, project manager at Camp Mohawk, said: “The work Amelie has done, and the money she has raised, is just phenomenal.

“We are incredibly grateful and quite humbled. It is always amazing when a family who uses our service gives something back.

“We haven’t yet decided what the money will go towards but we have been discussing options with the family.”

Julie Hinton, general organiser at the Music Club, said: “The money will help us to continue running our sessions. Things are becoming hard with covid and the cost-of-living crisis, so Amelie’s donation goes a long way.”