THE eighth annual On Your Bike challenge took place on Sunday.

About 520 people of all ages took part in the event, which set off and finished at Sonning Common Primary School.

Click here to view our picture gallery of those who took part.

The proceeds will be shared between the school, the Sue Ryder hospice in Nettlebed and the Thames Valley and Chiltern Air Ambulance Trust.

Participants rode routes of 5.5 miles, 12 miles or 20 miles and were guided around the course by marshals while toddlers and younger children rode supervised laps in the school playground.

The shortest route ran via Wyfold Wood and Gallowstree Common while the longest went out to Nuffield and returned via Ipsden.

Eddie Bayfield, six, and his father Joe, from Stoke Row, were first to return. They completed the 5.5-mile course in about 35 minutes. Eddies sister Amelie, four, and mother Katie were taking part for the second year running. Mr Bayfield said: It was quite easy  it was a little bit windy but luckily the rain held off and the marshals did a good job of getting us round safely.

Were definitely going to do it again next year and will hopefully be doing a longer route.

Organiser Penny Snowden said: This is the only event where the whole community comes together and I think it has become part of the villages DNA.

Its a lovely thing to have created because it has taken on a life of its own and its something people automatically enter.

Its hard work but its utterly uplifting to see all those smiling faces heading off year after year.

However, were relying on our long-standing volunteers to keep it going. If we could establish the momentum for a new team of volunteers we should be able to do a walking event as well. 

On Your Bike is organised in partnership with Sonning Common Health Centre and sponsored by 12 businesses including the Henley Standard. 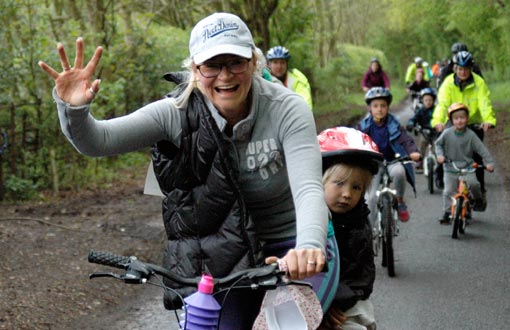