Mayor and friends cycle for charity

FOUR cyclists with a combined age of more than 250 cycled almost 70 miles in a day to raise money for charity.

Henley Mayor Stefan Gawrysiak was accompanied by Paul Waterman, Chris Ward and David Fielding-Smith on the 66-mile ride from the source of the Thames at Kemble in Gloucestershire to Henley on Tuesday.

The men set off at 8.40am and arrived at the Bull pub in Bell Street at 4pm  two hours earlier than planned  for a well-deserved pint.

They only stopped at Didcot for a lunch of sausages, beans and chips.

So far they have raised £1,900. The proceeds will be split between the Mayors charities, Sue Ryder, Age UK Oxfordshire, the Chiltern Centre for disabled children, Riverside Counselling Service and Headway.

Cllr Gawrysiak, who is 60 today (Friday), said: It was really good and I was impressed with how well I did.The last bit at Swyncombe Hill coming up the Chilterns was a killer. Up until then it was really good in terms of the weather and quiet roads and was really enjoyable.

The Mayor cycled 20 miles every other day in preparation for the challenge, accompanied by 66-year-old Mr Fielding-Smith, of Walton Avenue, Henley.

He said: If I hadnt done the training I might not have made it and it would have been exhausting. The team were fantastic, totally supportive. They are better at cycling than me and thats what kept me going. Cllr Gawrysiaks mayoral chain travelled with him in a support van and he donned it at various points throughout the day for photographs.

Businessman and experienced cyclist Chris Ward, 62, of Lambridge Wood Road, Henley, said: We had been talking about doing this for six months so it was a long time coming then suddenly it happens and were here.

Paul Waterman, 67, of Wood Lane, Sonning Common, said: I really welcomed the opportunity to get fit again for charity.

Paul Barrett, chairman of trustees at the Chiltern Centre, said: Hats off to the Mayor. Its an amazing achievement because it was self-inflicted  he didnt have to do it.

Im just full of admiration for his incredible dynamism.

To make a donation, visit http://uk.virginmoneygiving.com/team/henleymayor 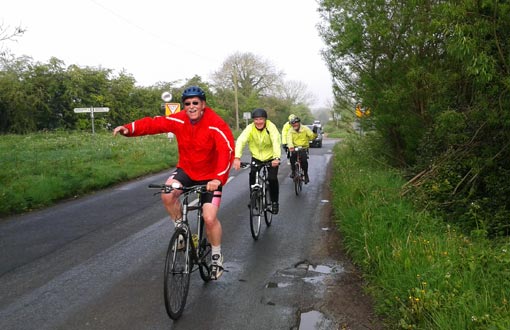