HENLEY Mayor Stefan Gawrysiak celebrated his 60th birthday with a charity concert for family and friends.

More than 100 people attended Fridays event which featured live music from the Reedy Fusion jazz band and the Razzles, a Beatles tribute band from Reading.

The party was in aid of the Mayors charities  Sue Ryder, Age UK Oxfordshire, the Chiltern Centre for disabled children, Riverside Counselling Service and Headway.

The guests included Mayor-elect Martin Akehurst and his wife Glynnis, Henley Bridge Rotary Club president Mike Pooley and John Green, chairman of the Henley branch of the Royal British Legion. There were also former pupils of Gillotts School, where Councillor Gawrysiak taught for 30 years. Richard Miles and Gemma Hart gave a display of ballroom dancing. Mr Miles runs the Miles School of Dancing with his father Raymond and holds classes at the town hall.

At the end of the night, the Mayor was presented with a birthday cake by the town hall staff.

Cllr Gawrysiak said: It was absolutely wonderful. The important thing is to remember that this was a charity concert which happened to coincide with my birthday but it was great to see so many people. Everybody had a good time and the bands were absolutely fantastic. We raised about £400 for the charities, which is great.

For more pictures from the party, see next weeks Henley Standard. 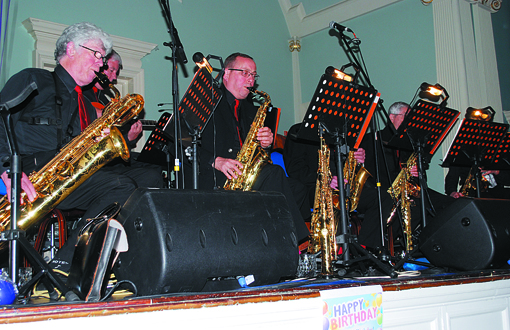