Smiles at Ride for Ryder despite high winds

ABOUT 130 cyclists took part in this years eighth annual Ride for Ryder event.

They were raising money for Sue Ryders hospice in Nettlebed by riding either 60, 25 or 10 miles around the Chiltern Hills.

The total will not be known for another month but each participant was asked to raise at least £100.

Click here to view some of our photographs of those who took part.

Competitors started and finished at the hospice and had their performances chip-timed.

The 60-mile route followed the 10-mile course then went to High Wycombe before returning via Hambleden.

Entrants came from across the UK, including many from South Oxfordshire, and their ages ranged from 11 to 77.

Anna Owen, who lives in Hambleden and is a support worker at the hospice, rode the 25-mile course with her mother Jayne.

She said: I did the 60-mile course last year but I think my legs have only just recovered. I wont be doing it again in a hurry.

This years ride was really lovely. The wind was a bit high but its for such a great cause  when you think of all the people its helping all those hills dont seem quite so big.

She rode 25 miles alongside Robert Matthews, also of Shiplake Bottom, and Sue and Chris Miller, of Grove Road, Sonning Common.

Ms Guy said: It was pretty tough because it was very windy out there  it was in your face the whole time.

It didnt help that we had a dinner party the night before and didnt finish until after midnight but we still made it. Andy and Eileen Elston, from Peppard Common, entered the 25-mile route for the first time.

They decided to take part as they had previously entered the On Your Bike cycling event in Sonning Common.

Their children Hannah, eight, and Jonathan, two, waited at the finish line with a family friend.

Mr Elston said: It was windy but the scenery was beautiful.

The event was very well organised and has a lovely atmosphere. I had to stop to fix a puncture and so many people stopped to ask if we had everything we needed.

Pru Sly, regional fundraiser for the charity, said: It was a bit chilly for the poor cyclists but it was a fabulous day and a great event for Sue Ryder.

Our supporters were not daunted by the weather. We were very pleased to see them showing a lot of interest and really enjoying themselves.

The event was supported by events company VOTWO and AW Cycles, of Caversham, which ran a mobile repair service. 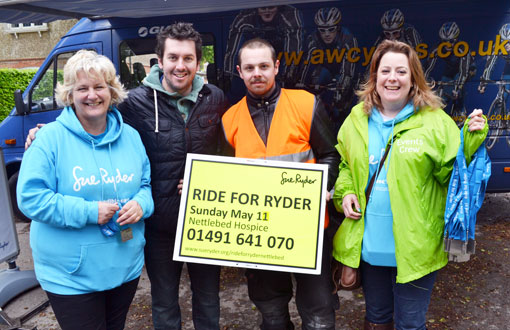