A TEENAGER has joined the Henley and District Talking Newspaper Association that was founded by her great grandfather.

Amy Green, 14, from Hurley, has always been keen to follow in the footsteps of her mother Caroline, who is secretary of the association, and Arthur Hull, who started it in 1982 with the support of Henley Lions Club.

She is one of the associations youngest readers. After a successful test read a few months ago, she recently read for the first time.

Mrs Green said: I think my grandfather would be very proud that three generations of his family are still involved in it.

I remember as a 10-year-old I used to help him in the school holidays with the copying side of it . I was desperate to read but he said I needed to be a bit older. My daughter has done the same thing and it means a lot to me.

The volunteers produce an audio version of the Henley Standard each week. With a team of four readers and a technical controller, they are recorded reading from the paper for about an hour and then the digital recording is copied on to a memory stick and despatched the next day to about 65 listeners free of charge.

The listeners are either blind or partially sighted or are unable to read the newspaper by themselves. 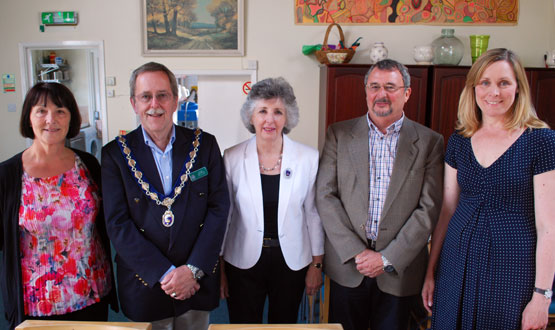 Speaking at the groups annual meeting held at the Over-60s Club in the Greys Road car park, chairman Richard Hodgkin said: We could do with increasing our listener numbers so please spread the word and introduce anyone you feel could benefit from receiving the weekly recordings.

We send these out not only to visually impaired people but also to anyone else who may be unable to read for themselves. He thanked the Henley Standard for providing copies of the paper each week, The Henley College for continuing to collect the memory sticks, Robin Rippon for maintaining the equipment and Townlands Hospital for making the Maurice Tate Room available free of charge for the recording sessions.

The hospital has agreed that the group can continue to use the room while the hospital is redeveloped.

Mr Hodgkin said: We are assured that a new Maurice Tate room will be included within the new hospital.

He also thanked the committee for its support and readers for their commitment.

Brian Head is the new listeners representative and will attend committee meetings.

To find out more about volunteering or to enquire on behalf of someone who would enjoy receiving the Talking Newspaper, visit www.henleytalkingnewspaper.org.uk