The event raised £2,000 for her foundation, which supports people who have suffered burns and scars.The 30-year-old former model was badly scarred after having sulphuric acid thrown in her face in 2008 and now campaigns to improve burns rehabilitation in the UK.

The show was organised by teacher Dr Valerie Vincent and a committee of sixth-form girls. The models were pupils from Queen Annes and Reading School and the clothes were provided by shops in Henley, Caversham and Reading. 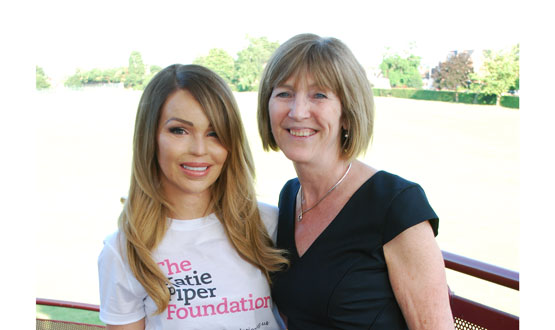 Ms Piper said: Its brilliant that the younger generation are aware of the charity and want to help.

Sometimes we might see issues on the television news and think we want to help but not put it into practice but the girls have really gone out there, knocking on doors, looking for gestures of goodwill, and really brought it all together. Thats very inspirational. Piper thanked the shows organisers and supporters, saying: I hope you are all very proud of yourselves for what you have achieved.

Former pupil Maddison Brudenell, 20, who used to work as a model, compered the show. She said: Its a lot of fun and a really good cause, so Im really happy to be involved. The models are a really great bunch and the clothes look amazing.

Dr Vincent said: Ive wanted to do a fashion show since I came to the school. I have a committee of girls and they chose Katie Piper as the charity they wanted to raise money for. We wanted somebody who represented the notion that you dont have to be tall, thin and gorgeous to look lovely in clothes and Katie incorporates all of that in her message."