A WOMAN who took up swimming after giving birth to her second daughter is planning to cross the Channel.

Hannah Young, 37, will attempt the 20-mile swim from Dover to Cap Gris Nez next month. 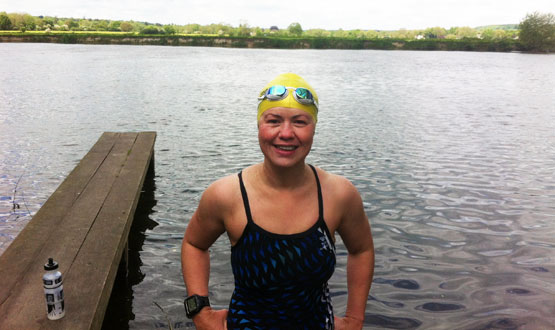 She has been training for up to 15 hours a week in the River Thames near her house in High Street, Wargrave, where she lives with husband Paul, 38, an IT manager, and daughters Emily, seven, and Annie, five.

On Sunday she completed a seven-mile swim off Bournemouth, the furthest distance she will go before the Channel crossing attempt.

Mrs Young said: The main challenges are going to be the cold and the distance. You are not allowed to wear a wetsuit when attempting to swim the Channel so Ive been training when the river is four degrees celsius in the winter to build up my resistance.

Ill also have to get my timing right with the tides because if you arent fast enough and it turns then you cant hit land and you will have to swim for another 12 hours or call it off. Thats the only thing Im worried about.

As Ive done more sea swims Ive become less nervous. Ive done a few six-hour swims off Bournemouth and spend some time every day in the river. Im looking forward to actually swimming somewhere for once because in the pool, river and sea Im always training in loops. Mrs Young took up swimming after Annie was born in 2009.

She said: Ive always been a recreational swimmer and was never in a club or team when I was younger.My husband did a lot of swimming while I was pregnant and I thought it would be a good way to get fit after having the baby.

She began with the Henley Classic, an annual 1.3-mile swim along the royal regatta course. She still takes part in this event every year and this year finished fifth in the traditional womens category and 216th overall.

Mrs Young decided to sign up for the Channel attempt after a swim in Lake Windermere in 2012. She said: I started off with the Henley Classic and built up to some five-mile races around the country. Each year I did an event harder than the last until Windermere. After that I thought I could give the Channel a go so I booked it with the Channel Swimming Association. It has been a long time coming but Im excited.

Mrs Young is raising money for a new £200,000 swimming pool at the site of the new Robert Piggott infant and junior schools in Wargrave. He daughters are at the infant school.

She said: The current school pool is falling apart and is too small for the children and too shallow for adults. The new pool will be 25m and will be used by the schools during the day as well as the local community in the evenings and at weekends.