A MOTHER-of-three from Henley who lost her aunt to cancer has shaved her head for charity.

Paula Isaac, 35, of Gainsborough Road, had her long, brunette locks shaved off on Sunday to raise money for Cancer Research UK.

She was cheered on by family and friends at the Saracens Head pub in Greys Road, where her best friend Fozia Shafi did the honours.

She raised £1,138 through sponsorship and a raffle organised by the pub landlords Colin and Melanie Roberson.

Mrs Isaac, a teaching assistant at Badgemore Primary School in Henley, wanted to raise money after a friend was recently diagnosed with cancer and in memory of her aunt Elaine who died after a battle with the disease in 2008.

She said: My auntie was so inspirational and brave. I have done something for Cancer Research every year since she died. I normally do Race For Life but I was thinking about how I could raise money by doing something more extreme. Someone suggested shaving my head and I thought 'well, Im game.

Mrs Isaac, who chairs the Gainsborough Residents Association, said she had felt nervous and excited but was glad to have the support of her husband Rob and children Kayleigh, 15, Keri, nine, and six-year-old Jamie.

Keri even joined in by shaving off the final lock of hair.

Mrs Isaac said: We have raised a lot of money so Im absolutely glad I did it. I felt a lot cooler straight away. My neck felt amazing!

Kayleigh said: Im so proud. She looks beautiful. I cant believe she did it, shes so brave.

Mrs Roberson, who donated bottles of wine to the raffle, said: We wanted to help because we have known Paula since she was 18. I think what she has done is amazing. She looks amazing, she has such a pretty face. Its lovely and its made me quite emotional. 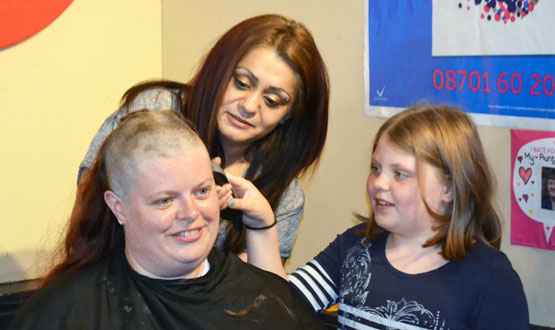