HUNDREDS of people took part in two swims in Henley at the weekend.

One was a new, fun event for locals while the other was a 14k endurance race from Henley Bridge to Marlow Bridge featuring international competitors.

Both were part of a series of summer events organised by Henley Swim, the company that started the Henley Classic, a swim which takes place on the royal regatta course before the rowing each year.

More than 170 people took part in the first Club to Pub Swim on Saturday evening.

Competitors had to swim 1.5km from Henley Rowing Club in Wargrave Road to the Angel on the Bridge pub via a buoy at Marsh Lock.

The event was nicknamed two bells as the swimmers started as the clock at St Marys Church struck 7pm and aimed to finish before the 8pm chimes. 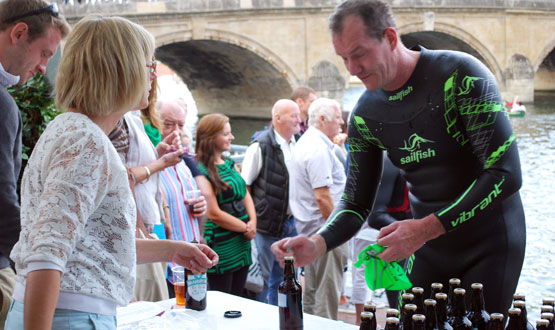 Each participant received a bottle of Brakspears specially brewed Two Bells ale at the finish as well as a medal which doubles as a bottle opener.

There was a barbecue on the river bank after the swim which dozens of swimmers attended still in their wetsuits or swimming costumes.

The race was split into two categories  traditional or open  and traditional swimmers were not allowed to wear wetsuits.

It was won by Dan Abel, who competed in the traditional category, in a time of 16 minutes and 17 seconds.

Organiser Tom Kean said: It was great. We allowed extra entries on the day so we had 170 swimmers, which isnt bad for the first year.

Town councillor Will Hamilton, who took part in the traditional swim and finished in a time of 38 minutes and 40 seconds, said: This is a great community event.

Mayor Martin Akehurst added: It looked like a good event and everyone had a great time. Most important of all, the emergency services had nothing to do! Meanwhile, more than 450 swimmers took part in the fourth annual Bridge to Bridge swim on Sunday.

They set off from Leander Club shortly after 8am, amid heavy rainfall, and headed downstream to Marlow via Hambleden, Hurley and Temple locks.

All the swimmers wore brightly coloured swimming hats and most had wetsuits. They were split into pods according to their speed and led along the course by safety teams in canoes and on paddleboards.

Organiser Jeremy Laming said: It was a great event although it was a difficult day because of the conditions.

For a while it was touch and go as to whether we would have to cancel the race but we made sure it was safe and briefed everyone very clearly before we started.

We had two evacuations at Hambleden and Medmenham because the swimmers were cold but everyone else finished the race.

The event, which was sold out, supports charities including Macmillan Cancer Support, Helen and Douglas House and SKIDZ.