Charity rowers stop off for a bacon sandwich

A TEAM of charity rowers passed through Henley on a 124-mile fund-raising challenge on Saturday.

The Jolly Rowers were on a four-day row from Oxford to Putney in aid of Comic Relief.

The 15-strong crew, most of whom are from Nottingham Rowing Club, stopped off at Henley Rowing Club, where they were shown round and given a hot drink.

They then made the short trip to Leander Club for a tour and bacon sandwiches before continuing their row.
,br /> Organiser Suzie Wynne said: Henley was brilliant and it was great to have the support. We often come to the town as a team to take part in the regattas.

Saturday was one of our easier days as we had a lot of stops at different rowing clubs but we had to make up the miles the next day!

The crew was made up of a coxed four and a coxed quad, although the personnel in the boats changed throughout the challenge. Only four people rowed the full distance.

They are hoping to raise £5,000 for the charity. To make a donation, visit www.justgiving.com/thejollyrowers 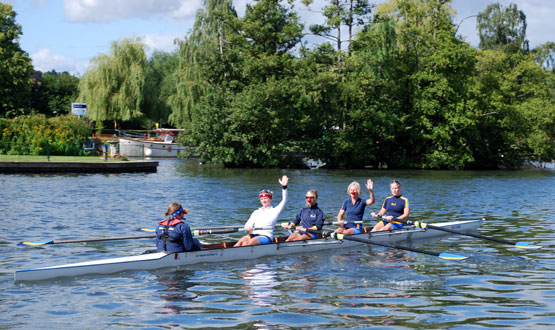