Hundreds attend 'Regatta for everyone'

HUNDREDS of people attended the fifth Henley Regatta for the Disabled.

The event, which celebrates access to the River Thames for all, took place at Phyllis Court Club on Saturday. 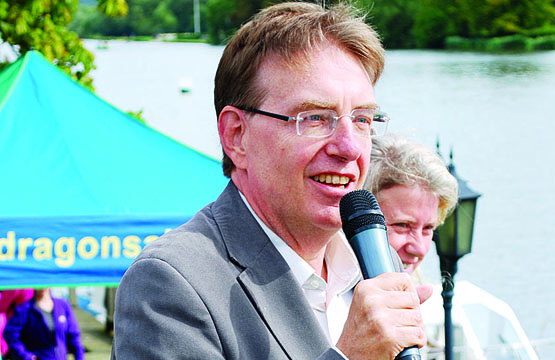 It was opened by Henley MP John Howell who also started the first of several dragon boat races and even provided a commentary.

A total of eight teams from local companies and special schools took part in the races and some crews wore fancy dress costumes as they took to the water.

The winners were the Hickling Heroes while a team from Headway, the brain injury charity, took the most enthusiastic crew award.

Visitors were able to take trips on the river with the Rivertime Boat Trusts 42ft adapted boat called Rivertime, two boats from Hobbs of Henley and a bell boat from Boatability, based at Bisham Abbey National Sports Centre, which offers activities on the water for the less able.

On land the entertainment included a fully accessible climbing wall, a petting zoo with pigs, sheep, donkeys, goats and ducks, a Punch and Judy show, tombola and ice cream van. There also live music, food and a bar.

Mr Howell praised the regattas longevity and said: Every year it gets better and better. It has become a fixture in the Henley calendar.

This is all about making sure that people understand that the river is for everyone.

The big regattas have established the name of Henley across the world and thats absolutely fine for the able-bodied but this is a special regatta for the disabled and it really finishes the regatta season for Henley.

Every year Im really pleased they invite me back to open it  I hope Ill be doing it for many years.

Regatta chairman Ian Tritton said: It went very well indeed. We had a very happy crowd who enjoyed all the activities and stands. I think we put something like 400 people into the boats. The regatta team of volunteers work throughout the year to meet the challenge of putting on an event that is totally inclusive, where the less able can join in the fun.

Every year it seems to just grow a little bit and the atmosphere gets stronger.

Mr Tritton thanked the Shanly Foundation, which sponsors the regatta.

The Mayor said: It was a lovely afternoon. Standing by the exit as they were packing up, I thought all the people leaving looked happy and like theyd had a good time.

Councillor Akehurst and his wife Glynnis took a trip on Rivertime and said: For years I was pushing my brother-in-law and father-in-law in wheelchairs and its not until you see something like that you think thats useful.

Other organisations that took part in the dragon boat races were Bishopswood School in Sonning Common, Henley software firm IndiCater, Phyllis Court Club, IT firm SAP UK, civil and structural engineering company Simpsons Associates, which has an office in Friday Street, and Team Holt from Addington School in Woodley.

Mike Day, chief executive of IndiCater, said: Our participation in the regatta has proved to be a beneficial team-building experience for us. It has a key place in our company calendar.

The regatta was founded in 2010 by Jane Holmes, chief executive of the Building For The Future charity, and Louise Light, a volunteer with Headway. Both have disabled children. Mrs Holmes stood down as chairwoman after the 2012 event and was replaced by Mr Tritton, from Rotherfield Peppard.