Camp dances to the sound of drums

A DAY centre for disabled children has been equipped with dozens of bongo drums, triangles and clackers after a donation.

Mohawk in Crazies Hill was given £1,600 by the Rotary Club of Henley Bridge to set up a new music workshop for visiting youngsters.

The instruments were presented at a party on Tuesday and children took part in a music session.

The money was raised through last years Henley half marathon, which is organised by the club.

Past president Annie Lathaen said: Mohawk applied for the money and it is good local charity which provides a wonderful service.

The musical workshop is for children who find traditional instruments too difficult.

Peter Adnitt, the clubs chairman of communities, added: This is exactly the kind of charity we like to support, one for deserving families who sometimes struggle to keep it together. The children have a lot of fun at Mohawk and its unique in the district.

Mohawk, which was founded in 2001, offers a range of activities to children with learning disabilities, including outside play, swimming and an indoor sensation room. The charity relies on donations.

Centre manager Luke Jansen said: Weve wanted to start doing music workshops for quite a long time. We had a few instruments on site but we needed quite a serious donation to get enough kit to do a workshop.

This magnificent donation has allowed us to get lots of extremely useful kit.

Its a constant and ongoing to struggle to raise the money we need but everyone takes it on willingly.

The club also made a donation to Bishopswood Special School in Sonning Common. 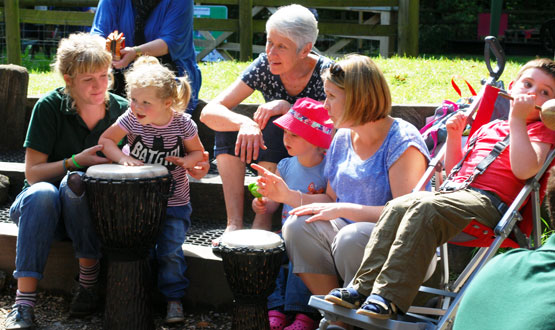