A COMMUNITY defibrillator has been installed in Henley town centre.

The life-saving device was supplied by the Millies Dream appeal and was unveiled outside HSBC in Market Place on Saturday.

It was paid for by Piers Burnell, from Remenham, whose sister Joanna died from a heart attack four years ago.

It is the 12th defibrillator to be installed thanks to the appeal, which was launched by Sarah Roberts, of Kings Road, Henley, in September last year and is named after her seven-year-old daughter, who has a heart and lung condition.

Miss Roberts had originally aimed to raise £15,000 to equip 10 local schools with a defibrillator but the appeal has now raised more than £25,000 and is supplying the machines to more schools as well as communities. 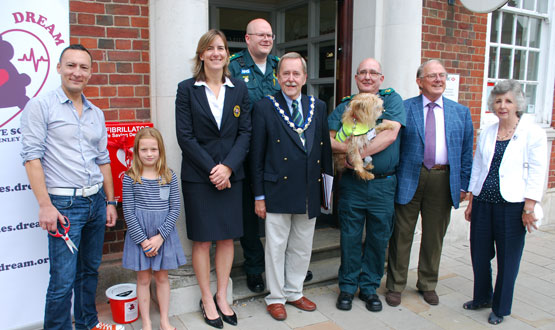 Mr Burnell, a coroners officer, cut the ribbon at a ceremony on Saturday attended by Miss Roberts, Millie, Mayor and Mayoress Martin and Glynnis Akehurst and Olympic rowing champion Katherine Grainger, who is vice-patron of the appeal.

I was in the Three Tuns pub last year reading about Millies Dream and knew I wanted to get involved. I thought that instead of giving £50 to a big charity not knowing where the money goes I would go out and get a defibrillator for the charity.

I also got one for my daughters school in Chiswick and helped with the one at Gillotts School. The defibrillator, which cost about £800, allows people to help victims of cardiac arrest by dialling 999 and receiving a code to access the device. The machine will then talk people through the procedure in simple steps.

Councillor Akehurst said: With cardiac arrest immediate response is the main thing and to have this in the town centre is great. We are delighted to have it and our thanks go to everyone who has been a part of this.

Paramedics from South Central Ambulance Service spent the morning in the town centre giving demonstrations on how to use the defibrillator. They were accompanied by Wheeze, their pet dog and mascot.

They were also hoping to recruit community first responders as Henley currently has only two  Robert and Jane Aitken, from Lower Assendon.

Paramedic Steve Cartwright said: While a defibrillator in the town centre is very good, having a first responder who can turn up quickly can make a big difference.

We only have two first responders in the area at the moment so we are desperate for more people to get involved. All you need is to be over 18 with a driving licence and we will provide all the training and the equipment youll need.