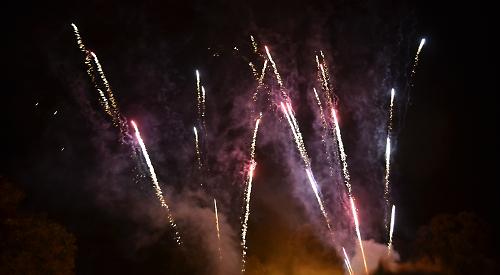 MORE than 3,500 people attended the 43rd annual Henley Round Table fireworks display at Swiss Farm in Henley on Saturday.

Visitors were let in free following last year’s event, which was cancelled at the last minute when a fault with the computerised firing system meant the fireworks didn’t go off.

However, there were collection buckets on the gate.

Despite the chilly evening with temperatures dropping to 5C, spectators began arriving 15 minutes before the gates opened at 6.15pm.

In the build-up to the display, music was played and food and drink was served. Round Tablers ran a hog roast and a bar with beers by Rebellion and Lovibonds while hot dogs and mulled wine were on sale.

A huge bonfire, with a guy made by children at Bishopswood Special School in Sonning Common, was lit and families crowded around it to keep warm. Many children bought glowsticks and glow-in-the dark toys or waved sparklers. Other attractions included fairground rides and the display of a vintage van provided by Henley removals company Wilkins, which sponsors the event.

The fireworks were provided by Skyburst, which was also responsible for last year’s display, and were fired manually rather than using a computer programme in order to prevent another glitch.

The display was twice as long as usual, lasting for more than half an hour, to make up for last year’s disappointment.

The event raised more than £6,800 which will go towards a new minibus for the special school.

The bus was also on display at the entrance to the site, where volunteers were collecting donations. Round Table member George Thomas said: “It was a fantastic display. Skyburst had the issues last year and said they were going to pull out all the stops this time and they did. I hope it made up for last year.

“Everyone seemed to have a great time and it was a bumper turnout.

“Lots of people were really complimentary about the fireworks and it showed as they really dug deep.

“I’d like to thank our main sponsor Wilkins who stuck with us after last year.”

The minibus was presented to the school in September. The £39,000 Renault Master has 13 seats and a rear lift to enable wheelchair-users to access it.

Round Table has already put £10,000 towards it, more than half of which was raised at last year’s display despite the cancellation, but still needs to raise the outstanding amount.

The new vehicle replaces the school’s old minibus, which was also paid for by Round Table.