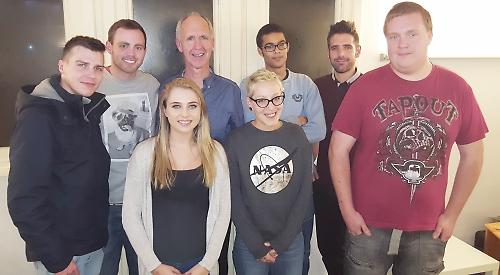 The charity’s annual meeting, which took place at the d:two centre in Market Place on Monday, heard that it had staged a total of 4,775 interventions in the 12 months to March 31.

A third of these centred on Nomad’s wider community initiatives, including literacy and numeracy education projects, the Light House food bank, mentoring schemes and support programmes for young people leaving secondary school for college or the workplace.

They also included residential trips, such as a week-long activity camp in the French Pyrenées, which was held in partnership with the Turville School Trust and attended by former Gillotts School pupils Ash Hickman, Molly Alliston, Jermaine Jackson and Jamie Gibbs. The youngsters showed the meeting a short video of highlights from the trip and each was presented with a framed photograph.

The food bank gave out 195 parcels, benefiting 237 adults and 172 children in the Henley area, and an additional 130 Christmas packages.

Just over 30 per cent of interventions comprised after-school activities such as the Monday night youth club sessions at the Henley YMCA sports pavilion off Lawson Road, youth groups at the d:two centre on Tuesdays and football at the YMCA pitches on Wednesdays and Thursdays.

They have helped families and young people with a range of problems including domestic violence, educational difficulties and drug and alcohol abuse.

The meeting was attended by Henley Mayor Julian Brookes, who designated Nomad as one of his three charities during his year in office.

Tim Prior, Nomad’s youth and families team manager, said: “It has been a very busy and challenging year but a rewarding one.

“Our whole team works tirelessly to offer incredible support to the community and we are very thankful for all their efforts.”