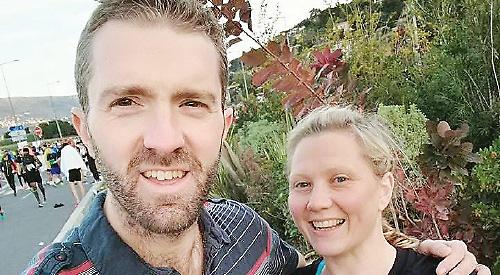 A WOMAN who took up running after finishing last in a parents’ race at her daughter’s nursery has completed a marathon in France.

Claire Wallis, of Luker Avenue, Henley, took part in the Marathon Des Alpes-Maritime from Nice to Cannes with her husband Ralph.

She came home in a time of five hours and 12 minutes and her husband finished in three hours and 45 minutes.

Mrs Wallis was raising money for the Countess of Brecknock Hospice in Andover in memory of her friend Nicki Wallis, who died there in September last year. Her husband was supporting Babies In Buscot Support in aid of the special care baby unit at the Royal Berkshire Hospital in Reading where some friends’ premature baby was cared for.

Mrs Wallis, 36, a nursery assistant at Highmoor Nursery, took up running two years ago to keep up with the couple’s children, Isla, four, and Maisie, three.

She said: “I did no running and used to take the car everywhere, even into town. I was very lazy.

“I came last in a mums’ and dads’ race at Isla’s pre-school. I couldn’t believe I couldn’t sprint 100m in a race.

“That’s when things started to change. I decided that I would do something to get fitter, fit enough to chase after my children.” She took part in last year’s Reading half marathon but hadn’t considered attempting a full 26-mile race until her friend’s death from bowel cancer.

Mrs Wallis later recruited her husband, a duty control manager for Crossrail, who was already a keen cyclist.

She said: “It started as a joke but when Nicki passed away it became something I wanted to do.

“I said to Ralph, ‘I don’t know if I can do this myself, I haven’t got the discipline, so do you fancy doing it with me?’ He said yes, which was really great.” The couple spent six months training for the marathon before flying out to Nice two days before the race.

Mrs Wallis said: “It was lovely there, about 16C. We had a couple of days to collect our race packs and take in the atmosphere.”

The start line had been moved from the Promenade des Anglais to the Allianz Riviera Stadium as a mark of respect for the victims of the July terror attacks in the city.

The couple bumped into two fellow runners from Reading at the start line.

Mrs Wallis said: “They saw that I was wearing my Reading half marathon shirt and came over. My French isn’t very good so it was nice to have some English people to talk to.”

She said the run was hard, especially when she hit “the wall”.

“After about 18 miles it was hurting so I started walking for a minute,” she said.

“You think ‘I’m not going to start running again’ but then you think of all the morning runs you’ve done and the support back home from family, friends and work colleagues.

“If you’ve got the right mindset you can run a marathon. I’m not the thinnest but I had the mindset.

“The last few miles were really hard but I knew I was going to be at the end soon and I could stop and never have to run again afterwards.

“It was really lovely crossing the line. Ralph had finished and was there to take photographs of me coming through.” When the couple came home they were greeted by a huge banner made by their children.

Mrs Wallis said: “They are proud of us and what we’ve done. As well as raising money, Ralph and I also wanted to show the children that if you put your mind to it you can achieve things.

“They know mummy isn’t a very active person and I’m not very sporty so hopefully this will inspire them and they will benefit from it.”

She added: “I want to keep running and I’m trying to do a half marathon distance once a week. We’ve already said we will do the Henley half marathon next year.”

The couple raised £1,300, which will be divided between their chosen charities.