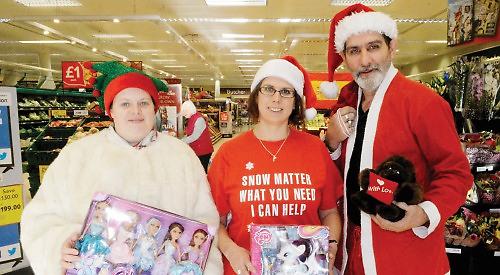 SHOPPERS at Tesco in Henley can donate toys to help sick children at Christmas.

The supermarket off Reading Road is collecting donations for the Gainsborough Residents’ Association’s annual motorcycle toy run to the Oxford Children’s Hospital next Saturday (December 10).

Contributions can be left in a box at the store’s entrance until December 5. They can include small toys, games, puzzles and toiletries but must be new and unwrapped.

The store has previously supported national toy bank campaigns but is supporting the association’s scheme, which is now in its fourth year, for the first time.

Tesco community champion Ali Simmons said: “We had a chat with the association and decided it would be a good idea to join forces as we could have a greater impact.

“An initiative like this can make all the difference to a child who might be having a bad day — it can really turn things around for them.”

The toy run, which will leave from Henley town hall, will be led by town councillor David Eggleton, who
co-founded the association and is a keen motorcyclist.

Interior designer Niki Schafer, of Walton Avenue, Henley, will ride on the back of his bike.

Participants will be accompanied by a Tesco delivery van carrying additional presents.

Councillor Eggleton said: “We’re very grateful for Tesco’s help. The people of Henley and the residents’ association always get behind us and it’s a great chance to give something back to people who might be struggling at Christmas.”

Donations may be given directly to the association, which is also seeking more volunteers to ride on the day.