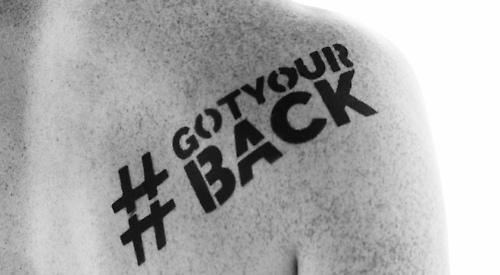 WILL SATCH was tattooed for the day in support of the armed forces charity SSAFA.

He was backing its Got Your Back campaign to encourage vulnerable veterans to ask for help when they need it.

The temporary tattoo behind his right shoulder read “#gotyourback”.

The charity’s Oxfordshire branch has supported 226 people so far this year but believes there are more veterans who would benefit from help but have not asked for it.

The charity says that a minority of military personnel, particularly younger veterans, struggle to make a successful transition to civilian life and experience social and financial difficulties and even end up homeless or in prison.

Lt Gen Andrew Gregory, chief executive of SSAFA, said research had shown these people only asked for help when they had reached “rock bottom”.

He continued: “When we ask them why they have waited so long before seeking assistance, the answer is very often that they felt too proud to ask.

“SSAFA’s Got Your Back campaign has a simple and clear message: those who have served this country have protected our backs, so don’t be too proud now to ask us to protect yours. Please call us.”