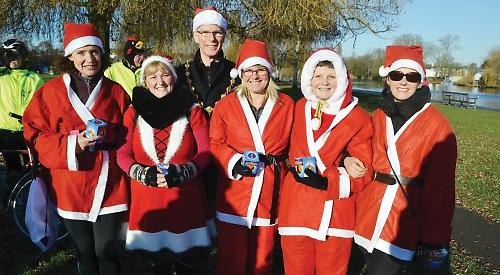 MORE than 50 people took part in the Mayor of Henley’s annual Santa fun run on Sunday.

Familiies gathered in a frosty Mill Meadows, many of them dressed in festive outfits including Santa hats, elf costumes and even a reindeer onesie.

Some brought their dogs along while others pushed their young children around the two-mile course in prams.

The runners went through a pre-race warm-up routine with personal trainer Laura Pye before being set off by Henley Mayor Julian Brookes. Among those taking part was Deputy Mayor Will Hamilton, while other town councillors acted as marshals.

The race was won for the second year running by 12-year-old Kai Sabijan, of Valley Road, Henley, whi dance the “dab” as he crossed the line.

Kai, a pupil at Gillotts School and a member of Reading Athletics Club, said: “I’ve run it for four or five years now, so I’m used to it. I wasn’t really bothered by the cold.”

After the race, all the runners were given hot chocolate and Cllr Brookes handed out prizes to the winner and second- and third-placed runners and to the best-dressed participants.

The best-dressed adult was Neil Alliston in a full Santa get-up while Georgie Pike, who came as a reindeer, took the children’s title.

The best-dressed team was five women called Fruity Knobs and the best dressed family was the Rigby-Penna family. They all received chocolate oranges from Cllr Hamilton.

The event raised £500 for the Mayor’s charities, the Henley YMCA, Riverside Counselling and Nomad.

Cllr Brookes said: “It was a great day and the weather was perfect. We had such positive feedback that we are thinking about holding a bunny fun run at Easter.”