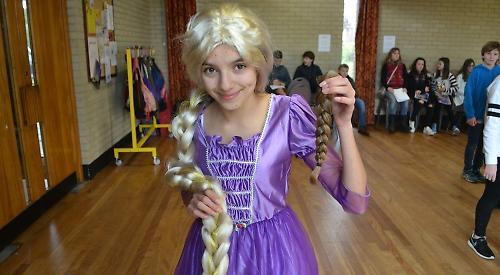 A PRODUCTION of Rapunzel by a Henley theatre group will feature a real-life version of the long-haired fairytale damsel.

Amy Havers will be playing the lead role in the show by Henley Children’s Theatre later this month — two years after she chopped off her own cascading locks.

Amy, 13, who lives in Wood Lane, Sonning Common, with her parents Nerys and Lee and brother Joe, 11, had been growing her hair for more than five years when she had it cut off.

At the time it was around 30cm long and almost reached her waist.

Amy says: “I’d been growing it since I was about six. It wasn’t planned but it was getting too long so I had it cut to shoulder length.

“That was strange to get used to — it felt much lighter and I kept trying to brush it all the way down!”

Amy, a pupil at Gillotts School in Henley, decided to donate her hair to Little Princesses, a charity which makes wigs for children who have lost their hair due to cancer treatment, but she never got round to it.

Muffin Hurst, who runs the theatre group, said she spoke to the youngsters about donating their hair to the charity before finding out that Amy still had her locks in a bag at home.

She says: “Not many of the children had hair long enough to donate. The only one was Amy, who had already cut off the right sort of length.

“This had nothing to do with her being cast in the role of Rapunzel, it was just a happy coincidence!”

Amy is one of two Rapunzels for the production, along with Olivia Jones.

Between them, they will appear in eight shows at the Kenton Theatre in Henley from Friday, December 30 to Saturday, January 7.

Amy has been a member of the theatre for four years and is excited to be playing her first lead role.

She says: “This is my fourth production. I like it because it’s very different and fills me with confidence, plus it’s very fun and I’ve made lots of friends.

However, because she no longer has long hair, she will need to wear a long blonde wig as part of her
costume.

Amy says: “I wish I’d kept my hair long now, then I wouldn’t need to wear the wig, which is really itchy!”