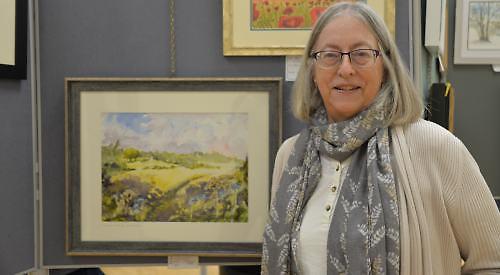 Almost 80 pieces by 20 artists were on display at the village hall.

They were judged by an independent adjudicator who visited the exhibition before it opened to the public.

More than 150 people visited the show and bought a record number of artworks.

The prize-giving was overseen by Jim Gillett, chairman of the parish council.

Katy Slatford won the Gimblet Cup for achieving the most points in the show and the Reynolds Cup for chairman’s choice for her painting Crowe Point.

She also won the 25th anniversary shield after achieving the most votes in the public ballot for her picture of elephants.

She said: “We have had a really busy year and we had a record number of picture sales at the exhibition.

“There is always room for more people to join us and we were pleased to see lots of people take away leaflets and say they would be interested in coming to our sessions.

“I have been a member for 10 years and am certain I have improved in that time — practice makes perfect.”

Meetings follow a programme which is designed to develop new techniques for beginners and encourage experienced artists to explore different mediums.

Bernard Bareham, the club’s oldest member at 96, attended the exhibition and won the award for the miscellaneous subject with Up & Over.

Ken Docking, the club’s treasurer, won the Roland Hearn Award for his piece called Hurst Cottages. The award is named after the first chairman of the group.

He also had the best piece in mixed medium called Autumn Glory. Mr Docking said: “What I like more than anything about the club is everyone is so friendly. It doesn’t matter whether you are a beginner or experienced.

“Everybody is so helpful and encouraging and there is a big social element to it for some of our older members.

“It has been really nice to see lots of old faces come to support us. We have had people who no longer live in Charvil come to the exhibition and that shows what kind of a club it is.”

The event also included a raffle to raise funds for the group.

Animal or bird in any medium: Elephants — Katy Slatford

Line and wash with any subject: Lizard — Karen Beaney

Miscellaneous subject in any medium: Up & Over — Bernard Bareham