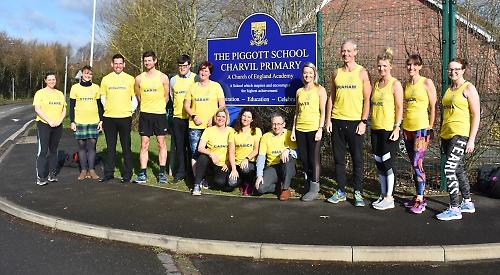 A GROUP of parents and teachers from the Piggott School Charvil Primary hope to raise £6,000.

The money will go towards a new 300m artificial running track at the school for use by the pupils.

This will allow them to sign up for the Daily Mile, an international initiative which encourages children to run or jog 15 minutes a day. Nearly 6,000 schools in England have already signed up.

The group had hoped to take part in the Reading half marathon next month but this has been cancelled due to the coronavirus outbreak so they will have to find a new challenge.

The idea for the fundraiser came from Mr Edwards, whose children, Lily, eight, and Mackenzie, five, both attend the school.

The 40-year-old social worker who lives at Farmers End, Charvil, with his wife Debbie, said: “I was sitting on the sofa and thought about doing the half marathon but I wanted to have a purpose and it had to be related to sport.

“I thought it would be better if there was a group of us in the school that would want to pull together and do something a bit more special than running without a cause.

“I put out a message on Facebook to see if there was any interest and there was a substantial amount.”

Mr Edwards, who ran the half marathon last year in one hour and 48 minutes, said he was delighted to do something positive for the school.

He added: “It is the first time I have organised something like this but I’m not surprised by the reaction. There is a good community here with motivated people.

“It is very difficult for the school because when it gets wet in the winter they struggle to use the playing field.

“Exercise helps my mental and physical health and that is why this challenge is so important to me.

“Children should not only be staying active but looking after their emotional wellbeing.” Mr Hillerton, 35, who lives in Thatcham and ran the half marathon five years ago, said: “Physical activity is very important for young people.

“We also find that it helps children to concentrate after doing sport and getting some fresh air.”

The team has so far raised more than £1,700. To make a donation, visit justgiving.com/crowdfunding/
cpsadailymile