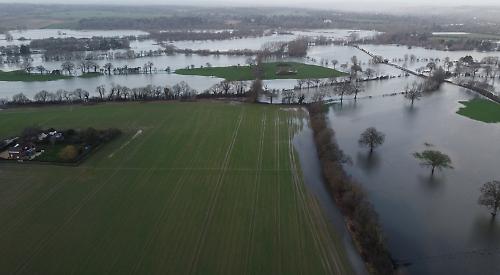 RESIDENTS of Charvil have come out strongly against new housing development in the village.

They accounted for almost a third of the responses to Wokingham Borough Council’s draft local plan, which allocates 160 homes across two sites in the village.

They say this would put too much pressure on local services and that one site is unsuitable anyway as it is prone to flooding.

• East of Park View Drive North, which the plan says could accommodate 85 homes.

• West of Park Lane, which is earmarked for 75 units and where 25 homes are already being built by Hicks Developments, which was granted planning permission on appeal in 2016.

The draft plan, which predicts the housing need for the next 16 years, identifies Charvil as a “limited development location”, meaning it has most of the key services but not as many as larger settlements.

Out of the 566 responses received by the council from across the borough, 184 were from Charvil.

There were 96 comments made about the site at Park View Drive North, 84 of them being objections and the other nine neutral.

Residents said the scale of housing being proposed was inappropriate and that there would be too much reliance on cars due to a lack of invesment in public transport connections.

Pressure on the capacity of local schools was also referenced, along with traffic congestion on the A4, inappropriate development in the countryside and a lack of consultation with the community.

Robert Jones, who lives in Park View Drive North, said: “The sheer number of people who’ve responded is quite amazing. I think it sends a very strong and clear message from the people of Charvil.

“We’re now eagerly awaiting what the council has to say.

“The site at Park View Drive North is very threatened by flooding. You don’t need to be an expert to question if that’s a good place to put houses.

“It is isolated from any kind of service, on the wrong side of the A4 and in the open countryside. You would need a car to get anywhere and it is in no way sustainable.”

John James, also of Park View Drive North, argued there were about 200 other sites across the borough that were not a flood risk and more suitable for development.

He said: “This site is totally inappropriate and in a flood plain. There has been no specific risk assessment for the site, so they haven’t really taken account of the increased risk of flooding due to environmental changes.

“It is also going to have an impact on traffic and schools.

“I’m hoping the council will stop wasting further time and effort on this site. The flood zone was tucked right at the end when it was one of the main reasons for the objections.”

The site at Park Lane prompted 127 comments, with 115 being objections and 10 neutral.

Most of the concerns were similar, although the proximity to ancient woodland was also cited.

Mr Jones said: “There has been an issue for many years about the continued overdevelopment of that site. We’ve responded loud and clear in large numbers and we deserve a little bit more clarity.

“Services and access to GPs and schools have been a big issue lately, particularly with some people not being able to get into the Piggott School.

“This isn’t pure Nimbyism. We already have homes being built in Charvil, so it is not a question of stopping all development.”

Charvil Parish Council is compiling a neighbourhood plan, but this is unlikely to be ready for 18 months.

Councillor Jane Hartley, who chairs the council’s planning committee, said residents should expect some level of development but agreed it was important to measure it against local services.

She said: “I am a bit concerned that residents might not be being realistic about what choices there are. People can be very against something and instead of accepting development and managing it cohesively, there is a bit of an ‘us and them’ approach.

“We can’t say ‘No development’, but we can be clear about what the residents want in terms of what type of development and the dependent infrastructure required to make it work. We’ve got a problem with school places and traffic is another concern.”

She added that the parish council would be sending out a survey to residents and the responses would be incorporated into its plan.

The borough council had earmarked Grazeley for 15,000 homes, which would have met most of the housing need, but this development now looks unlikely to go ahead due to its proximity to the Atomic Weapons Establishment at Burghfield.

Council leader John Halsall, who represents Wargrave, Remenham and Ruscombe, said there would be another public consultation later this year.

“The whole thing needs to be reconsidered,” he said. “We will go through the exercise again and people will be invited to respond. The consultation helps us to discover things that we don’t know.”