Caring girls collect 43kg of rubbish around their village 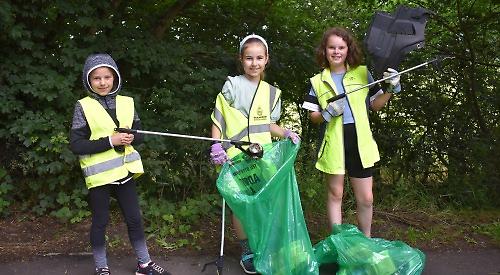 THREE girls collected rubbish around Charvil while taking part in a sponsored event for their school.

Friends Jessica Hilling and Rose Brown, 10, and nine-year-old Megan Jeffery decided to do a litter pick as part of Charvil Primary School’s “10k Your Way” fundraiser.

Pupils could complete the required distance any way they wanted between June 25 and 27 and were encouraged to be creative.

Jessica’s mother Sarah, who is a teacher at a primary school in Wokingham, said: “All the parents are really proud of them for coming up with such a different idea that would benefit not only the school but also the wider community.

“The girls thought of the idea all on their own. They were looking for something a little bit different and creative. They have been doing a lot to do with community involvement and recycling at school. I think the idea of picking up litter was more fun than just running.

“They were looking to collect 10kg of rubbish but got 43kg. I thought their target was optimistic so the fact that they quadrupled that was very surprising.

“At the time, they were really excited to have collected so much and every filled bag felt like another achievement. But when they reflected on it, they were disappointed at the amount of rubbish that had accumulated in the local area.

“Now they get frustrated because rubbish is reappearing again.”

The girls raised £350 with an online donation page, helping the school raise a total of £3,371 for a new sensory garden and summer house. The target was £2,000.

Encouraged by their success, the girls now plan to do a litter pick together every fortnight.