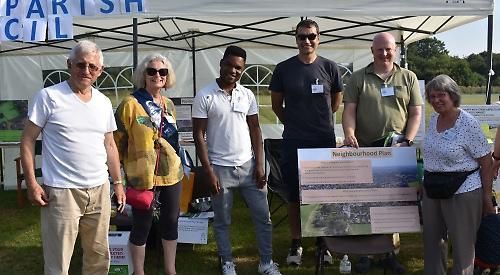 HUNDREDS of people attended a village party in Charvil on Sunday.

Dozens of stalls and attractions were set up on the playing fields at East Park Farm, off Park Lane.

The event was organised by the village fete committee who decided to rebrand the event as a “post-covid celebration” to thank the community for its efforts during the coronavirus pandemic.

It was originally due to take place on July 4 but had to be postponed when the covid-19 restrictions were extended.

There was live music from Piston Broke, a band who appeared at the last fete in 2019, as well as a barbecue and a  bar.

Chairwoman Ruth Cowdrey said: “We usually donate any profit we make from the fete to local charities. This year, we wanted to put on a free event for the community to come together and weren’t running it for profit.

“Everybody did so much and worked so hard during lockdown.”

Maidenhead MP and former prime minister Theresa May attended the event and spoke with members of Charvil Parish Council, who were running a stall to promote their neighbourhood plan.

Councillor Jane Hartley said: “So many people came to see us and give us their thoughts. Theresa May had a chat about all the projects we are working on. She was so nice and supportive, as she always is.”

Cllr Hartley, who is also a member of the fete committee, added: “The fete is more commercial but this time it was a celebration of the local community.

“It was called a party and not a fete, so we didn’t have lots of stalls selling things.

“ We had community groups and charities and the companies that were selling food were all local. We ran out of beer as it was such a hot day but it was a lovely day.”

Sam Akhtar, who represents Charvil on Wokingham Borough Council, was running a stall for Charvil Matters, an environmental group he founded in 2019 that organises monthly litter picks in the village.

He said: “It was a great day and there were a lot of new residents who seemed really interested to find out more about the group.

“There was also a lot of positive feedback from residents about how well the group has worked since we formed and how quickly we respond to cases of fly-tipping, which is really positive.

“More generally, the event as a whole was really positive and it was great to have all those different groups together in one place.”

• The next litter-pick hosted by Charvil Matters will be held on Sunday, September 26. Volunteers are asked to meet in Milestone Avenue in the lay-by opposite the Texaco petrol station at 10am. From there, they will be allocated an area to clean for an hour. Volunteers are provided with rubbish bags, grabbers and hi-vis vests but are advised to bring their own gloves.