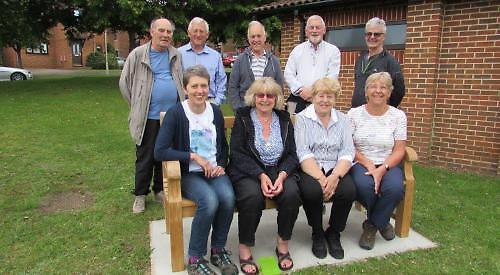 A CHARITY quiz is to be held in Charvil in memory of a village stalwart.

Margaret Moore, who passed away on January 5, aged 77, was a founding member and secretary of the Charvil Village Society for 10 years.

The society was set up in the mid-Eighties by Paul and Margaret Gregory, who both passed away three years ago.

Mrs Moore and her husband Frank moved from Twyford to Thornbers Way, Charvil, in 1986 with their daughters, Rachel Roach, now 50, and Kate Wood, 52, and their pet tortoise Toby, who is still going strong after being gifted to the family more than 50 years ago.

Mrs Roach said: “My mother was a really active member of the community. She volunteered for the drive committee, helping the elderly and infirm get to hospital appointments in Charvil and Twyford.

“She was secretary of the village society and she also was a part of the women’s group too.

“My mother helped out at Daisy’s Dream, a charity supporting children through bereavement.

“She spent many Saturday mornings at Reading Minster selling charity Christmas cards leading up to the festive period.

“Last summer she received a devastating diagnosis of mesothelioma. This is a type of cancer that is synonymous with asbestos exposure.

“We don’t know when she came into contact with asbestos — it would have been around 35 years ago.

“We didn’t realise that this was the last Christmas we would have with mum — we didn’t know we would lose her so quickly.

“I’m so pleased we managed to all get together. Mum got to spend time with her three grandchildren, Sam, 23, and Jess, 20, and my sister’s daughter, Lottie, who is 12.

“Mum was a very organised and friendly lady and she was very well known around Twyford and Charvil — she had lots of friends.

“Neighbours have described mum as having played a matriarchal role, and that Thornbers Way will be missing a strong pillar.

“One neighbour said, ‘She was one in a gazillion and the street won’t be the same without her’.”

Mrs Moore worked for Keith Day Printers in Henley for many years. Her husband was a head of quality control for John Lewis in London before he retired.

Mrs Roach said: “My parents had been married for 56 years — they tied the knot in September 1966.

“They loved to travel. On their last trip, they circumnavigated Australia and spent New Year’s Eve 2019 watching the fireworks over Sydney Harbour Bridge.

“They had visited more than 30 countries and went on safari in the Kruger National Park in South Africa and visited South America, the Caribbean and family in California.”

Mrs Wood said she and her mother never missed an opportunity to attend royal events.

“If there was a flag to be waved in Windsor, we’d be there,” she said.

“For Prince Charles and Camilla’s wedding in 2005 we took a very small Sam and Jess with painted faces and were featured in the BBC coverage.

“We then attended Princess Eugenie and Jack’s wedding in 2018 and we were interviewed by America’s CNN.

“We’ll miss mum bringing over a crumble made with surplus fruit from the allotment and pulling up the weeds we missed in our front garden.”

In 2019, a bench was installed near Charvil village hall in Park Lane by remaining members of the society in memory of the Gregorys and now a plaque for Mrs Moore will be added to it.

The society is organising the quiz, which will take place at the village hall next Friday  (February 18), starting at 7.30pm.

It costs £7 per person to enter and teams can have up to have eight people.

Participants are asked to bring their own refreshments.

The proceeds will be donated to Sue Ryder at the request of Mrs Moore’s family.

Since her passing, the family have raised £1,792 via an online fund-
raising page.