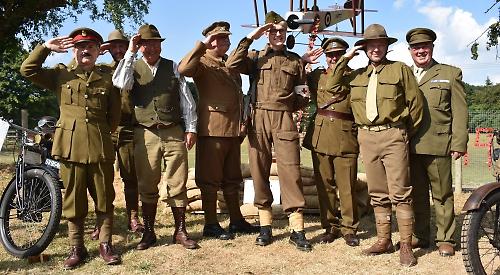 CUSTOMERS and staff at a Checkendon pub dressed up as soldiers, nurses and fighter pilots to mark the centenary of the end of the First World War.

The Black Horse off Uxmore Road was decorated with Union flag bunting, poppies and hay bales for the event on Saturday.

There were also several 20th century motorbikes and an early version of the Ford car in the grounds, as well as models of fighter planes and trenches made from sandbags.

In the evening, a band performed songs from the era and a traditional wartime meal of corned beef and beans was served. The Last Post was also played by a bugler at 8pm.

The pub, which dates back to the 18th century, has been run by Martin and Margaret Morgan for 50 years and has been in Mrs Morgan’s family for more than 100.

They regularly hold summer parties for customers and the family also visits war graves in Belgium and France as Mrs Morgan’s uncle Archie Stallwood was killed in action.

They decided to give this year’s party a First World War theme following a suggestion by John Green, chairman of the Henley and Peppard branch of the Royal British Legion.

Mrs Morgan said: “We always do something as a thank-you to our regular customers.

“This time we decided as it’s 100 years since the end of the war we’d do this. My husband had the idea to include the model plane and poppies.”

Mrs Morgan’s daughter Claire Wilkinson, who helped organise the event, said: “Mum and Dad go over to Ypres a lot and felt it would be nice to have a celebration of the end of the war.

“We couldn’t do it in November because it would be too wet and cold so we did it for our summer party.

“It was amazing, we had nearly 80 people and most of them dressed up. It was a nice effort and everyone looked really good.

“We are very pleased with how it went.”