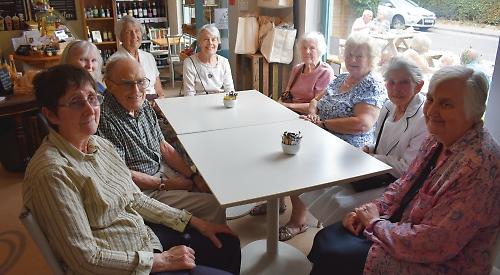 A SOCIAL club for elderly residents in Checkendon has disbanded after 28 years.

The Thursday Club has met every two months in the village since 1990, following the closure of the Checkendon Women’s Institute.

It has had up to 18 members at different times but recently only five people were attending the meetings so they decided to close the group.

They met up regularly for a chat, a cup of tea and to reminisce about times gone by.

Nine members attended the last ever meeting in the café at Stoke Row Stores on Friday last week where they enjoyed a cream tea and a chat.

Mary Weller, who has hosted the meetings at her home since 2000, said: “It was decided the club should end on a high note.

“They did a lovely cream tea for us and everyone was very happy. It was nice to end on a high, in a happy way.”

The club first met at villager Peggy Beeton’s home in 1990. The village’s WI had stopped after it was unable to appoint officers from its membership to lead the group. She hosted the meetings until she passed away in 2000, then Mrs Weller took over hosting.

Daphne Horne took over organising the meetings, which would sometimes include a guest speaker or demonstrations, between 2000 and 2008.

Mrs Weller then began arranging the meetings. She said: “The WI members liked the social contact through meetings and felt keen to carry something on.

“It was always very informal and the members appreciated it being in a house and not in a hall or somewhere else where there would have been a different atmosphere.

“It gave members an opportunity to chat and hear a speaker of some sort but only ones we knew locally as we had no funds to pay for speakers. Or else we would sit, chat and recall our memories about things that happened in our childhoods or the food we ate when we were young.

“It was good for older people to recall their memories and share them.”

The membership has declined due to people moving out of the area, passing away or finding it difficult to get to the meetings.

Mrs Weller said it had been a great way to get people out of the house.

She added: “In Checkendon we have lost our bus services, our shop, our mobile library and our pub. We seem to have lost everything and really there was nothing for older people.” Mrs Weller said some of the club’s members would now be attending the monthly Age UK film club and Golden Age club in Woodcote.

Both take place at Woodcote Community Centre, off Reading Road, on the fourth Wednesday and second Tuesday of each month, respectively.

“I’ve been to both groups and they are absolutely wonderful for older people,” Mrs Weller said. “They will help take the place of the Thursday Club.

“It’s not too far but it does require transport, which is one of the big problems for most of our members.”