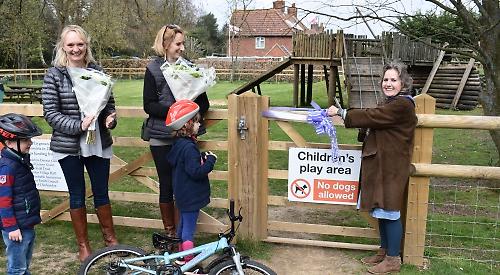 A NEW adventure playground in Checkendon has been officially re-opened.

The facility on the village green was re-equipped at a cost of £33,500 over the summer and opened to children in October.

A ribbon on the entrance gate was cut by Lorraine Hillier, chairman of the district council, at the official opening on Saturday. Alexandra West and Charlotte Nichol, who led the project, were each presented with a bouquet of flowers.

Cllr Hillier, who joined children on the swings after performing her official duty, said: “I get the very easy job of just coming along and cutting the ribbon but I know about all the hard work that has been done by Charlotte and Alexandra and all the committee members. They’ve worked very hard to bring this to fruition. It looks really good fun. It’s very creative and I’m very impressed.”

Matthew Wickens, chairman of the parish council, said: “The adventure playground was first devised in the early Eighties and was completed by many volunteers with recycled materials.

“After 30 years it had stood the test of time but the time had arrived for it to be significantly updated and improved. We were able to open it on a trial basis in October, which appears to have been very successful. It has been very well used in this interim period.

“I would like to take this opportunity to express my gratitude to Alexandra and Charlotte, without whom this would not have been possible.”